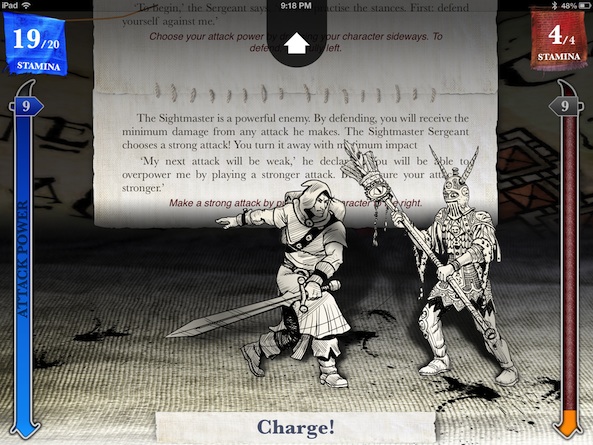 When I was a kid, choose-your-own adventure books were all the rage. You didn’t have to be an antisocial geek to enjoy them, either. There were fantasy adventures, horror stories, detective mysteries, and more. All you needed was a love of books and a few dollars for a paperback.

When I first saw the game trailer for Sorcery!, I was elated to see that the gamebooks of my childhood were experiencing a revival on iOS. Not only is this a fantastic story, but the app’s developers have worked hard to bring the pages to life in an interactive and exciting way.

Sorcery! is a gamebook adventure that first launched in 1983 as part of the Fighting Fantasy series of books. Today’s universal iOS launch is not the first Fantasy Fighting gamebook to hit the App Store, but it certainly has revolutionized the choose-your-own-adventure story as a digital medium…

This app oozes with fantasy game play. If you appreciate the world of orcs, dwarves, and dragons, you are going to be pleasantly overwhelmed with the epic artistry that has gone into every element of the design of this game. The menu screen, for example, is a huge map that looks like it could be an extension of Middle Earth.

Players choose the path they will take on their adventure by literally choosing a path. Instead of being presented with the question, “Will you enter the village or go south?” you physically move a game board token to the next section of the adventure.

As the story’s text appears on screen, it is presented in sections, bound together by thread. Each new section of text is attached below the previous one. When the reader is presented with options, they appear at the bottom of the screen like index cards. Choose the next move you wish to take and the story will adjust accordingly.

If one of your options involves some kind of action, like a battle or casting a spell, a new scene will appear with the new action.

Your character starts the adventure with a spell book and a sword. The book lets you cast spells that will help get you out of a sticky situation. The sword is useful for when you get into tussles with other characters.

The user interface of this game is exceptional. You can easily rewind your story if you don’t like where you are headed. If you die during an adventure, tap the rewind sign to go back to a previous section of the story. To access the spell book, tap the book icon at the bottom of the screen. This will allow you to look up and memorize spells that will come in handy later in the adventure. 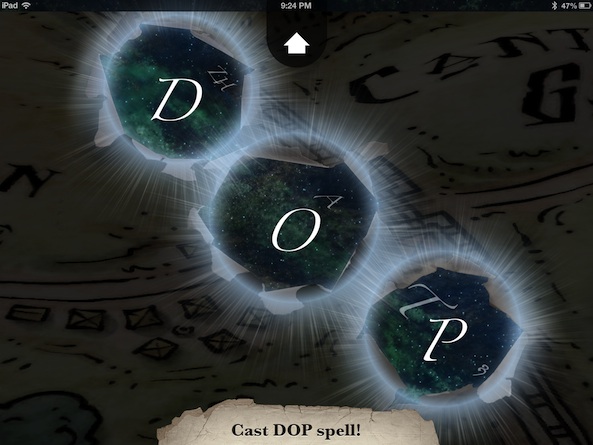 Players start by collecting a few items from town and having one last training session with the local lead warrior. After you learn the basics of spell casting and fighting, you will leave the city gates. Outside of the protection of the town, you are a lone adventurer, making split-second decisions that will influence the outcome of your quest.

It is a text-based adventure, but not like a computer text-based game. You won’t be trying to “Grab Ye Flask” for two hours. It is an adventure game with pre-written outcomes that you pick from.

For example, if you come across some other characters on your path, you may choose to avoid them, or engage them. If they turn out to be bad guys, you can either fight them, or try to get away from them. Everything you choose to do will affect the way the rest of the story unfolds.

In this game, not only do you choose your path and decide to fight or flee, but you also cast spells and engage in stats-driven battles. If you fall off of a cliff, you can cast a spell to try to stop from falling to your death. If you succeed, you will continue on your adventure. If you fail, you go splat.

The fights are very unique. Instead of using a dice role to determine your fate, you decide whether to defend or fight based on moving a paper cutout version of your character to the left or right. If you want to stand at full defense, stay all the way to the left. If you want to attack, move your character to the right. The closer to your enemy you get, the harder the attack will be.

Your character has a limited number of stamina points. During battle, you will use up stamina to attack. If you run out before your opponent does, you’ve lost the fight, and your life.

The map that you use to select your adventure path is also a unique feature of this app. Instead of simply turning a virtual page, readers move a game board token from one section to another. No matter what path you draw, your character will follow it to the next destination. If you want to draw curly-Qs from point A to point B, it will still work. 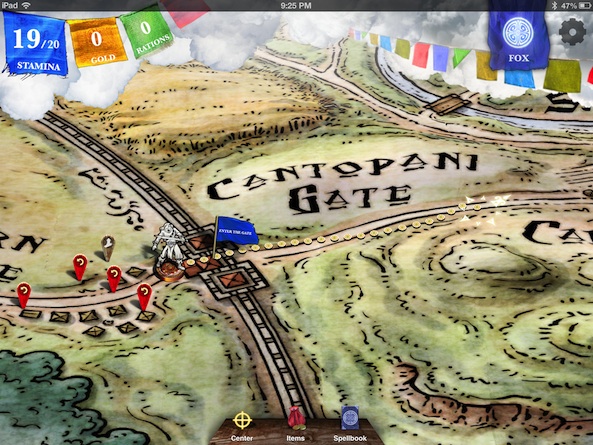 Every once in a while, a game comes along that is so interesting and so unique that it feels like a refreshing spoonful of sorbet on a hot summer day. Not only is the iOS remake of Sorcery! a distinctively different type of gamebook adventure, it is very well made. I didn’t experience a single issue with the game’s controls, touch screen sensitivity, or crashes. It was a joyful experience for someone who grew up with gamebooks.

It doesn’t happen often, but this game doesn’t have a bad.

This game costs $4.99, which is on par for gamebook games and choose-your-own-adventure stories in the App Store. If anything, this game is a bargain for being the best version in this genre that I’ve ever seen.

If you know what gamebook games are, or remember choose-your-own-adventure stories from when you were a kid, Sorcery! is an absolute must-have. It is well made, top quality, and has a unique aspect for incorporating touch screen interactivity with traditional gamebook gaming.