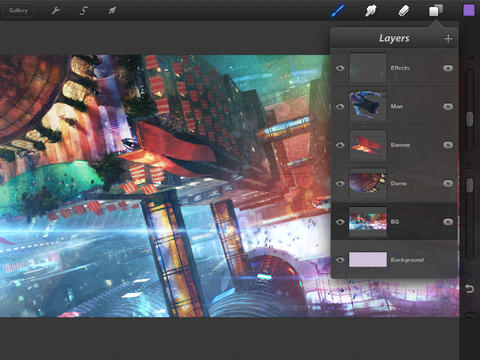 The winner of the 2013 Apple Design Award, the iPad illustration app Procreate by Savage Interactive has never ceased to amaze me with its natural-looking brushes, deep bench of features, its gorgeous interface and the incredibly accurate and smooth Silica painting engine.

Hot on the heels of Monday’s introduction of Wacom’s pressure-sensitive Intuos Creative Stylus for iPad, Savage has now updated the app with support for the new Wacom hardware.

Canvas recording taps the Silica engine to let the software automatically record your progress with full HD (1,920-by-1,080) maximum video output. You can share the videos to your Camera roll, Dropbox, iTunes or Email.

In addition, each clip gets encoded with a nice start splash of your final artwork.

“As a thank you to our community after winning an Apple Design Award,” developers announced that all Artery brushes in Procreate are now completely free.

Moreover, grain files and all other in-app purchases are now available free of charge in your Pro library.

Other features in this Procreate release include improved support for Dropbox, iTunes export and Adonit Jot Touch, as well as the vastly improved brush cursor and the obligatory bug fixes.

In addition to Procreate, other popular apps have been updated with Wacom support, including Autodesk’s SketchBook Pro and ArtRage.

My drawing skills are non-existents, but that hasn’t stopped me from spending countless hours trying to become a Procreate artist. The app is the closest thing I’ve found to pencil and paper with layers and I wholeheartedly recommend you give it a try.

Procreate is available for the iPad in exchange for five bucks. The download comes in at 53.9MB and requires iOS 6.0 or later.