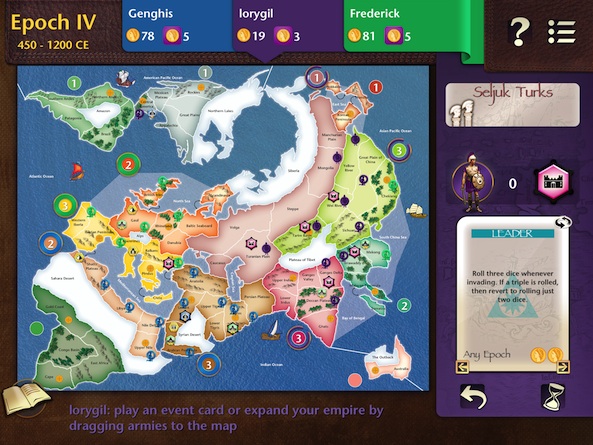 The iPad is great for so many different reasons, but my favorite reason it is that I can have epic board game sessions without having to schedule a get together with friends, or even get out of my pajamas.

Maybe you won’t actually be learning history, but A Brief History of the World is an engaging and challenging game of domination over the empires of the world. No set up required. You don’t even need another person to play with…

The app is designed to look similar to the physical board game. Players place tokens on the map to represent armies, monuments, and ships. Your hand is on the right side of the screen with the map taking center stage.

During your turn, your event card, empire card, armies, buildings, and other items are displayed on the right side of the screen in the “Array.” To switch between event cards, swipe left or right on the card’s face. To place an army, drag it from your Array to the region you want to capture.

The top of the screen shows you and your opponents’ scores. Players also earn gold that is hidden during the game, but you can see how much each player has by tapping their bonus icon.

At the top right of the screen, you can get a hint for what you should do next by tapping the question mark icon. To access options and rules, view the events and empires, or to exit the game, tap the menu icon at the far right of the top of the screen.

You can see each a list of each player’s actions by tapping the game journal at the bottom left of the screen. This will show you what cards your opponent has played, the results of an invasion roll, and how much gold they collected.

To see the map, (the game board), drag your finger around on the screen to move the view. You can also zoom out using the pinch-to-zoom feature. 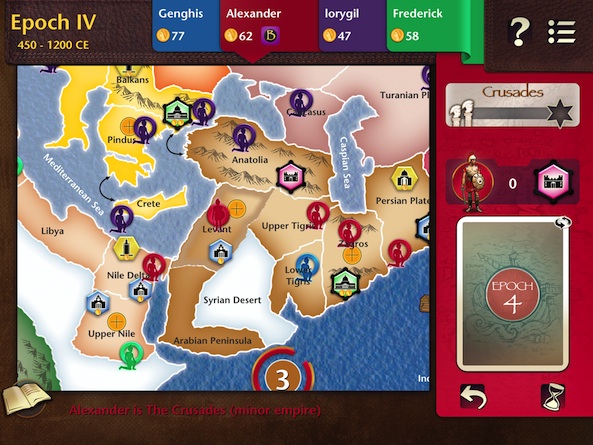 When you first open the app, you will be asked if you want to play the tutorial. If you have never played A Brief History, you’ll definitely need the help guide. If you already know the game’s mechanics, you could probably skip the tutorial. Most of the game’s features are easy to find and self-explanatory.

Players choose an empire and event card for the first round of eight rounds of game play. Each round is called the Epoch. Players try to expand their empire as much as possible in each Epoch. The more armies, cities, and monuments you have in play, the more gold you will earn.

When it is your turn, you will be able to expand your empire by dragging an army to the game board or play an event card. The game will prompt you to perform a possible action. You will be able to play an event card that will help you invade or capture land. Then, you can place your armies. To capture land, drag an army to the game board. Your possible moves will be highlighted while all other areas will be blacked out.

If you wish to invade a region that is already occupied by another army, you can attack them by dragging your army onto an opponent’s land. This will automatically trigger the invasion battle. Players will roll dice to see who wins. You will be able to add bonuses to your score if you played a compatible event card.

When you attack an opponent’s army, the number of dice you can use will already be ready and the roll will happen automatically. If you win the roll, you will take the land and earn gold for your new occupation. If you lose, you will have the choice to fight again at the expense of another army, or retreat to save your battle for another region.

When you play against Artificial Intelligence players, you must play at least two other opponents. They will take their moves in order. You can’t skip AI players’ turns, but they move very fast. So, you don’t have to wait too long until your next turn. You can adjust the speed of the AI’s plays, as well as the animation, in the settings section. You can also play your own music instead of the game’s empire-themed soundtrack.

You can play the game with others in the same room in pass-and-play style, or online through Game Center with up to six other opponents. There is a comprehensive rulebook to help newer players figure out the game. The Almanac shows all of the game’s empires and events, listed by Epoch if you ever want to view the card decks.

The game plays smooth and the tutorial is fairly comprehensive. If you are new to the game and get stuck, you can always tap the hint icon to see what you should do next. It is great for people who love board games, but have never played this particular title before.

The transfer from physical board game to digital is well done. The animation is limited, so you still feel like you are playing a board game, not a video game.

I experienced a game freeze twice while testing the app on my iPad. I only had to close the game in the app switcher and reopen it. My game was saved and I was able to pick up where I left off, but there does appear to be a small glitch. 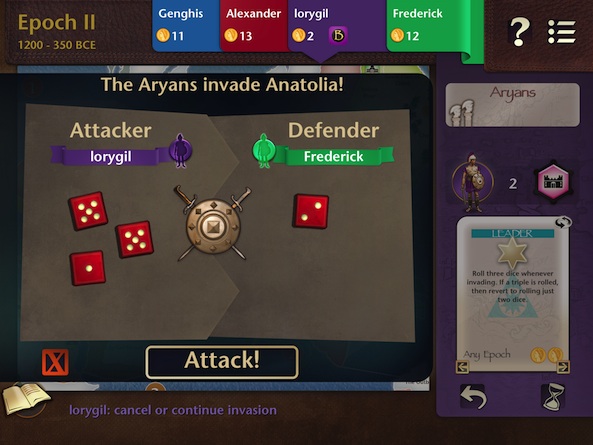 A Brief History of the World is on sale to celebrate the launch of the game. You can purchase it for a short time longer for only $2.99, which is a fantastic deal for a board game app. It is regularly priced at $5.99, which is about right for a game like this.

I had never played the board game version of A Brief History before. I felt a little intimidated by the complexities of the game. I even lost against the AI opponents a few times and felt like giving up. However, the step-by-step hint feature makes it easier to learn what to do next. Plus, the entire rulebook is available inside the app. If you like empire domination games, you will enjoy this, even if you’ve never played the physical version before. A Brief History is available for the iPhone, iPad, and iPod touch. Download it in the App Store today.

Although the rules are different, Tigris & Euphrates has a similar land domination feel to it. Risk is another game that lets players take over the world with invading armies.