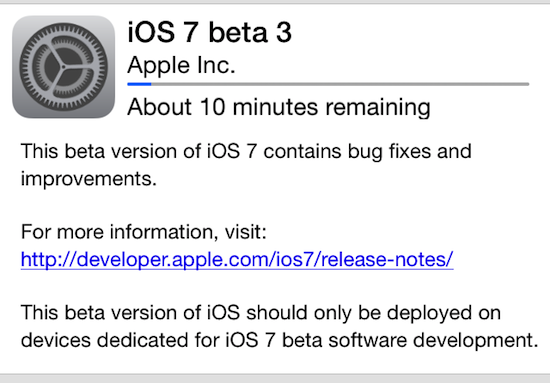 As predicted by a report late last month, Apple has seeded iOS 7 beta 3 to developers this morning. The update comes two weeks after Apple posted the second beta to its next-generation mobile operating system, and nearly a month after it released the initial version following its WWDC keynote.

The third beta is available for compatible iPhones, iPads and iPod touch models, and can be downloaded by visiting the Software Update section in the Settings app of devices that currently have iOS 7 installed. It should be available in the dev portal shortly. You’ll find more details after the fold…

iOS 7 is nearly a complete departure from its predecessor. We’ve spent the last four weeks taking an in-depth look at many of the changes Apple has made, from stock app UI design to new features, in a number of articles which you can see here. And there were several enhancements made in beta 2.

We’re currently installing today’s update ourselves, and will be reporting back with any new stuff we find. So keep checking this post throughout the day as we add any changes we spot. And as always, we welcome you to let us know if we missed anything by e-mailing us at tips@idownloadblog.com.

As we continue to dig through the new information in iOS 7 beta 3, we’ll be listing any major changes we find below:

And here’s the full changelong from Apple.

Support for Car Display will be provided once compatible systems are available.

Some high-resolution photos will not sync (via iCloud and other services) when set as a Contact’s Caller ID photo.

Workaround: Use a lower-resolution photo.

When the UIViewGroupOpacity key is not present, the default value is now YES. The default was previously NO.

This means that subviews of a transparent view will first be composited onto that transparent view, then the precomposited subtree will be drawn as a whole onto the background. A NO setting results in less expensive, but also less accurate, compositing: each view in the transparent subtree is composited onto what’s underneath it, according to the parent’s opacity, in the normal painter’s algorithm order.

Many updates to the MCSession APIs are included in this seed. The APIs now function as they were presented at WWDC. Major changes and enhancements include:

MPMediaPickerController has been disabled for this seed. It will immediately return as if the user canceled the selection.

Newsstand background downloads that use HTTP basic or digest authentication will prompt the user with authorization alerts (NSURLConnectionDelegate Protocol callbacks forconnectionShouldUseCredentialStorage and willSendRequestForAuthenticationChallenge are not called correctly).

Due to changes in how the isa field is implemented, *self may change during enumeration (for example, if the container is retained).

In General > Background App Refresh, the per-app settings are not honored.

After erasing the device from Settings > General > Reset > Erase All Content & Settings, CrashReporter logs will no longer be copied from the device to the computer.

Workaround: Restore the device from an IPSW instead of using Erase All Content & Settings on the device.

This seed includes development versions of new male and female Siri voices for U.S. English and French, and a male voice for German.

When using the iOS 6.1 SDK on OS X v10.8 Mountain Lion, if you use the iOS 5.0 or iOS 5.1 Legacy SDK in iOS Simulator, you will not be able to use Twitter features: attempting to sign in to Twitter via the Settings pane will fail, and Twitter.framework will not work correctly. If you need to test Twitter features, you will need to choose either an iOS 6.1 or iOS 6.0 Simulator run destination, or you can test with iOS 5.x on a device.

+[AVPlayer playerWithPlayerItem:] returns an AVPlayer object, but the current item will return nil if the player was created on another thread.

The Wi-Fi sync option in iTunes is checked, but Wi-Fi devices do not appear in iTunes.

Workaround: On OS X, install the iOS 7.0 SDK after installing iTunes. Wi-Fi sync is not supported on Windows.

Reminders does not work with VoiceOver.

Weather conditions are not animated on iPhone 4.

Let us know down in the comments if you spot other tidbits not mentioned here.