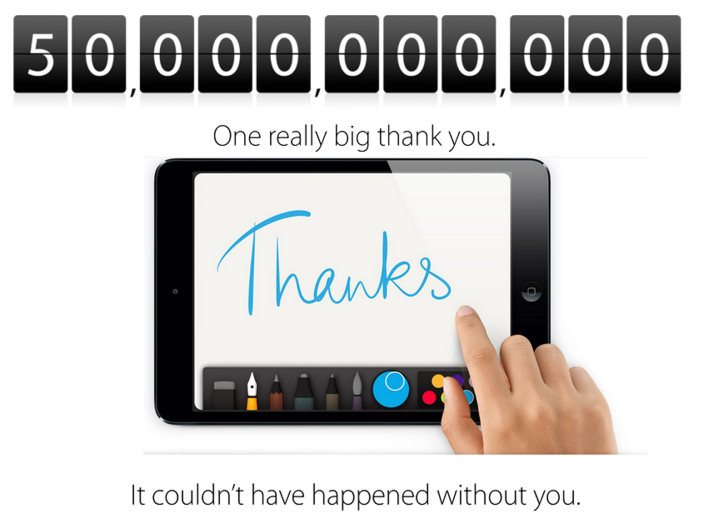 The lucky winner is Brandon Ashmore from Mento who downloaded the Say the Same Thing app by Space Inch, LLC. Mind you, these are unique downloads that exclude re-downloads and updates.

The achievement is “historic,” Apple writes in the press release.

The release also states that users are now downloading an average of more than 800 apps per second at a rate of over two billion apps per month on the App Store. As the installed base grows, app download rate is accelerating and now stands at approximately 20 billion app downloads per year.

Apple would like to thank our incredible customers and developers for topping 50 billion apps downloaded.

The App Store completely transformed how people use their mobile devices and created a thriving app ecosystem that has paid out over nine billion dollars to developers. We’re absolutely floored to cross this milestone in less than five years.

The App Store opened in July 2008 with 500 apps. Today, the store carries 850,000 apps for iOS devices, with more than 350,000 apps created specifically for iPads. The App Store operates in 155 countries around the world and offers software in 23 categories.

We just hit 50 billion app downloads. Thank you. It couldn’t have happened without you. #50BillionApps tw.appstore.com/hgE

Google’s Android software, of course, powers an estimated three out of four smartphones and tablets shipped so we’re expecting the Play store to pass the App Store in terms of downloads.