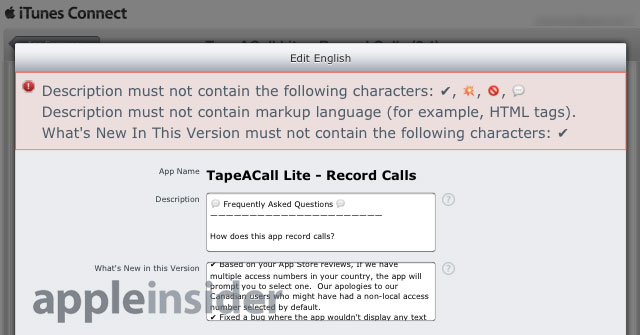 From time to time, Apple updates its iTunes marketing requirements. The goal is to provide the most accurate and reliable descriptions for the mobile applications, movies, television shows, songs and other media content types customers download from iTunes.

In the most recent example, the iPhone maker has reportedly taken issue with app blurbs. Long story short, Apple is no longer willing to turn a blind eye on luring would-be buyers with “enhanced” app descriptions that contain exclamation marks, stars, smileys and other special characters.

The change was communicated via the iTunes Connect web portal, a venue registered iOS developers use exclusively to upload their submissions and iTunes marketing materials…

Emoticons and other special characters are now a big no-no, author Mike Campbell writes for AppleInsider.

As seen in the image above, Apple is no longer allowing developers to submit app description edits with the unique character sets, which in this case includes a checkmark, explosion, “no symbol” and a speech bubble.

Going forward, programmers are required to use only standard text for their submitted updates and steer away from using any non-standard characters.

The publication was able to confirm with two different developers that the date of Apple’s new iconography requirements has been set on April 19. More special characters may have been blacklisted, though that has yet to be verified.

In another recent change, Apple said developers can only change App Store screenshots after submitting a binary for an app update.

The new policy was put into effect in order to eradicate a widely used scam tactic where devs would switch the just-approved screenshots with images from a completely different application.

However, I must say I’m disappointed that it is consistently allowing app screenies with huge captions emblazoned on them. That kind of in-your-face marketing just doesn’t look professional and it’s rarely found on Google’s Play Store.

Now, how ironic is that?