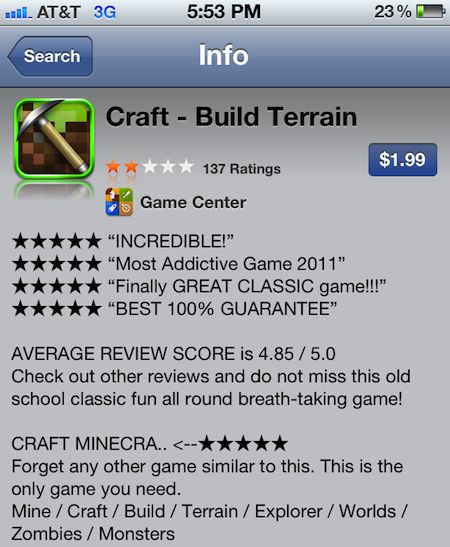 Have you ever downloaded an app on your iPhone or iPad, and it didn’t look anything like the screenshots in the App Store? If so, you wouldn’t be alone. Switching screenshots after Apple has approved an app has become a popular tactic for scammers.

But we have some good news this afternoon. Apple announced to developers today that, starting this week, all App Store screenshots will be locked after they are approved. And they’ll stay that way until a developer submits a binary for an app update…

Here’s the notice posted on Apple’s developer portal (via MacRumors):

“Beginning January 9, app screenshots will be locked in iTunes Connect once your app has been approved. New screenshots may be uploaded when you submit a binary for an update to an existing app or a new app. For more information on capturing and using screenshots, read the Xcode User Guide.”

This may seem like an insignificant update, but, as aforementioned, it eradicates a widely used scam tactic. Developers would upload app/game screenshots to get an app approved by Apple, and then switch them out with images from another application.

We’ve seen a number of fraudulent apps slip into the App Store using this method over the years, mostly of the $0.99 variety. Craft – Build Terrain, a fake Minecraft app sticks out, because it used screenshots from the official Minecraft app to dupe users.

Of course, Apple has always been pretty good about pulling bad apps from the App Store quickly. But this new rule should help keep a lot of them from making it in in the first place. I’m actually not sure why this wasn’t a rule from the get-go.