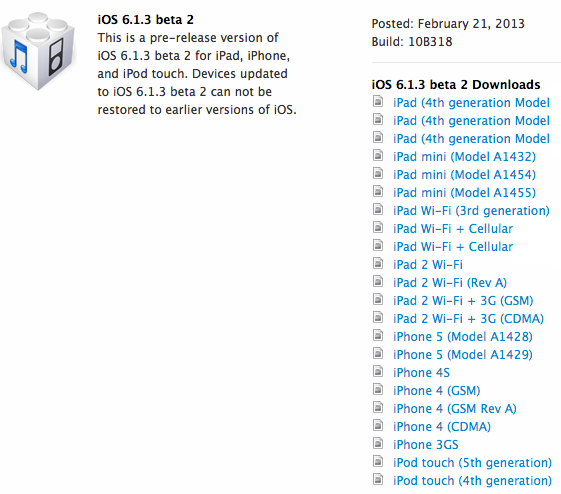 Believe it or not, Apple has seeded a beta for another iOS update to developers today. The company has already issue two software updates, 6.1.1 and 6.1.2, in as many weeks, and only released iOS 6.1 three weeks ago.

Today’s developer software is marked as iOS 6.1.3 beta 2. The first beta was actually sent out earlier this month, known as iOS 6.1.1 beta 1, but it’s been renamed to iOS 6.1.3 due to the recent iOS bug-fixing updates…

This update, as we previously noted, includes several enhancements to the Maps application for Japan. According to 9to5Mac, it also fixes the lockscreen bug. And of course, as always, there’s a chance it fixes the jailbreak.

With that in mind, you’ll definitely want to stay clear of updating to iOS 6.1.3 if you are jailbroken. Pod2g reported that the original version of this software, beta 1, did not break evasi0n, but beta 2 has not been looked at yet.

In the past two weeks, Apple has seeded iOS 6.1.1 to iPhone 4S users to fix the 3G connectivity problem, and iOS 6.1.2 to repair the Exchange bug. With those fixes out of the way, we expect iOS releases to return to normal.

If you are a developer, you can download iOS 6.1.3 beta 2 from the iOS Dev Center, and let us know if you find anything interesting in there.