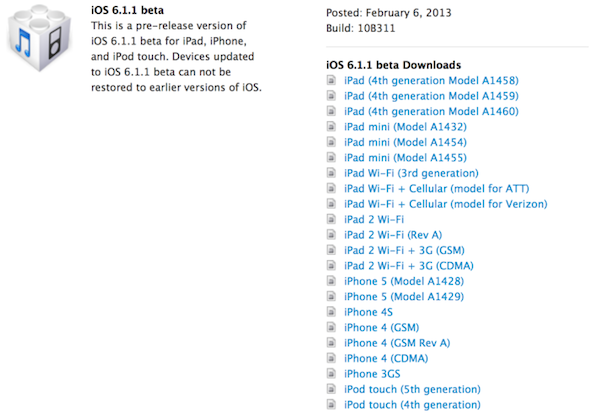 It’s only been a week since Apple released iOS 6.1 to the public, and it’s already hard at work on the software’s next update. The iPhone-maker has seeded the first beta of iOS 6.1.1 to developers this morning, bringing the build to version 10B311.

It’s also worth noting that today’s beta arrives just 48 hours after the iOS 6.x evasi0n jailbreak was released. So obviously, those of you who are jailbroken that have access to today’s software update will want to avoid it until it’s investigated…

6.1.1 beta is already out to developers!Obviously stay away from that.

The release notes say that the new beta includes a number of improvements for the Maps app in Japan, including better pronunciation of roads during turn-by-turn navigation, updated icons for location categories and the addition of place data.

We’re still digging through the firmware for any changes, and we’ll report back if we find anything worth noting. But if I was a betting man, I’d say that this update has more to do with patching the vulnerabilities exposed by evasi0n than anything else.