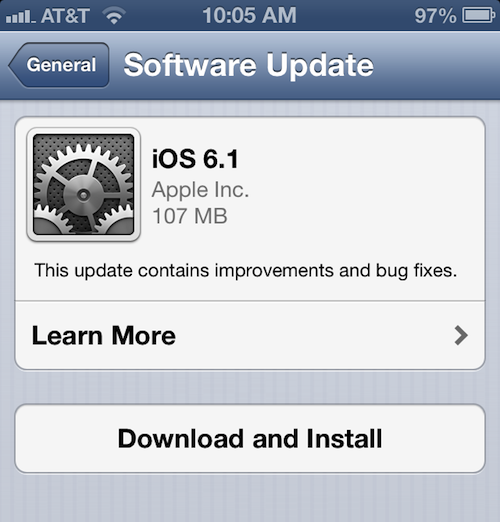 Following up Saturday night’s release of the fifth iteration of the iOS 6.1 beta, Apple has seeded the final version of iOS 6.1 to the public (download link). The release comes nearly three months after the initial beta of iOS 6.1 was issued to developers.

So what did Apple do to its mobile operating system during all of that time? Well, most of the changes here were expected. There’s now more carrier support for LTE, and Siri is now able to purchase movie tickets through Fandango.

The update contains the following new features and improvements:

Also as expected, iOS 6.1 adds Bluetooth keyboard compatibility to the Apple TV—perfect for performing searches through iTunes or YouTube. And, as noted by 9to5Mac, Apple has also included new Map APIs for better app integration.

Perhaps the most exciting thing about the update, though, has to do with the impending jailbreak. Hackers have indicated that they have an untethered jailbreak in the wings, but have been waiting on Apple to drop iOS 6.1 to release it.

iOS 6.1 appears to have been released! We are reviewing the publicly available version now.

As of now, it looks like iOS 6.1 is available both OTA and on Apple’s website. Jailbreakers: we believe that it is ok to update. But just to be on the safe side, you might want to wait until after these guys get done checking it out.

As always, you can download iOS 6.1 for your specific device on our Downloads page.