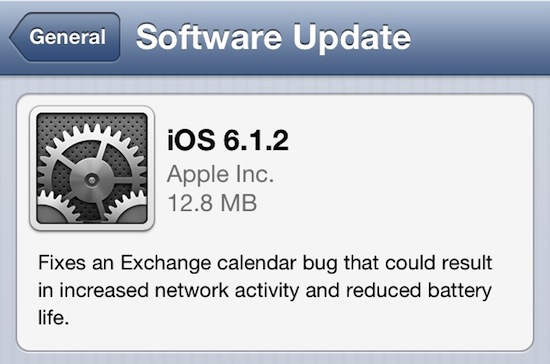 In line with previous reports, Apple has released iOS 6.1.2 this morning to fix the Exchange calendar issue that has garnered so much attention in the past few weeks. The bug significantly increases network usage, which affects device performance and battery life.

As you can see in the screenshot above of the firmware’s release notes, the patch for the Exchange problem appears to be the only change in the new software. But still, we recommend that jailbreakers refrain from updating until it’s been deemed safe by the community…

iOS 6 has actually been having Exchange difficulties from the get-go. Back in October, a problem with declining meeting invitations was discovered, that sent meeting cancellation notices to an entire distribution list, effectively canceling the invitation for all attendees.

The more recent issue, which also has to do with Exchange meeting management, causes a continuous loop between iOS 6.1 devices and Exchange servers while trying to synchronize recurring calendar meeting invitations, leading to significant drops in device performance.

But Apple promises the problem is fixed this time around. So if you’ve been affected by the Exchange bug, and aren’t worried about losing your jailbreak, feel free to update to 6.1.2. It should be available over-the-air, or as usual, you can find it on our Downloads page.

If you are loving your jailbreak as much as us though, you’ll want to stay away from the update for now. Today’s release comes just one week after iOS 6.1.1 and two weeks after the release of the evasi0n jailbreak, so needless to say, we’re approaching it with a level of caution.

We’ll let you know as soon as we find out something concrete.

Update: As noted by Federico Viticci over at MacStories, today’s update also fixes the passcode bug that was brought to light last week.