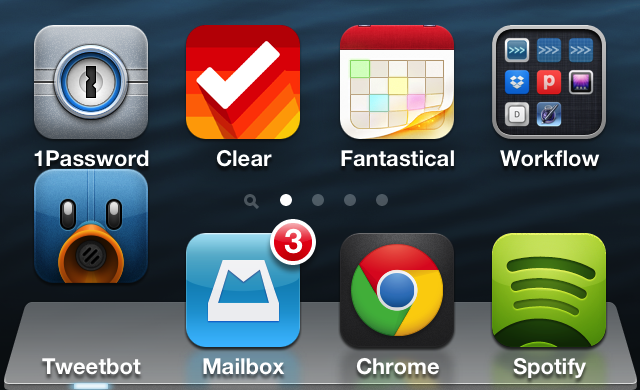 When you hear about an upcoming tweak collaboration between jailbreak community staples like Filippo Bigarella and Surenix, then the tweak is pretty much destined to be good. Unsurprisingly, that is the case for the upcoming ActiveDock, a jailbreak tweak that brings an OS X styled dock to the small screen.

We’ve gone hands-on with ActiveDock and put it through its paces. Needless to say, we came away impressed. Check out our video walkthrough inside.

ActiveDock is a tweak that focuses primarily on enhancing the look of the iOS dock. Considering that Surenix is an accomplished graphics designer credited on projects like Springtomize 2, Evasi0n, and Ayecon, it’s not exactly surprising that the tweak makes the iOS dock look so close to its desktop counterpart.

While not surprising, it is a bit startling when you consider how much detail has been put into ActiveDock. You’ll notice subtleties like light indicators, which tell when a particular app in your dock is running, and blurred reflections, which mimic OS X to a tee.

The real outstanding feature about the tweak’s design is that you pretty much don’t know it’s even there. If ActiveDock was installed on your iPhone unbeknownst to you, you’d probably never recognize that it was there. It blends in so well with stock iOS, and doesn’t stick out like a sore thumb. You can’t say that for a lot of the popular WinterBoard themes out there, but you can surely say so for ActiveDock. BTW, ActiveDock doesn’t require you to use WinterBoard, just in case you were wondering.

The coding mind behind ActiveDock is none other than the well-accomplished Filippo Bigarella. Bigarella is the same developer who created the recently release LivelyIcons, a fun little jailbreak tweak aimed at raising money for cancer research. His more ambitious tweaks, CleverPin, Springtomize 2, and PasswordPilot, have made many of our “must have” lists over the years, and all three appeared on our recent “perfect iPhone” post.

ActiveDock, while looking pretty, has a bit of functionality up its sleeve as well. Venturing into the Settings app, you’ll find a kill switch, and bounce settings for the apps in your dock. The bounce settings allow you to enable a bouncing app icon whenever an app is launched from the dock, or more usefully, whenever you receive a push notification for an app running in the dock. 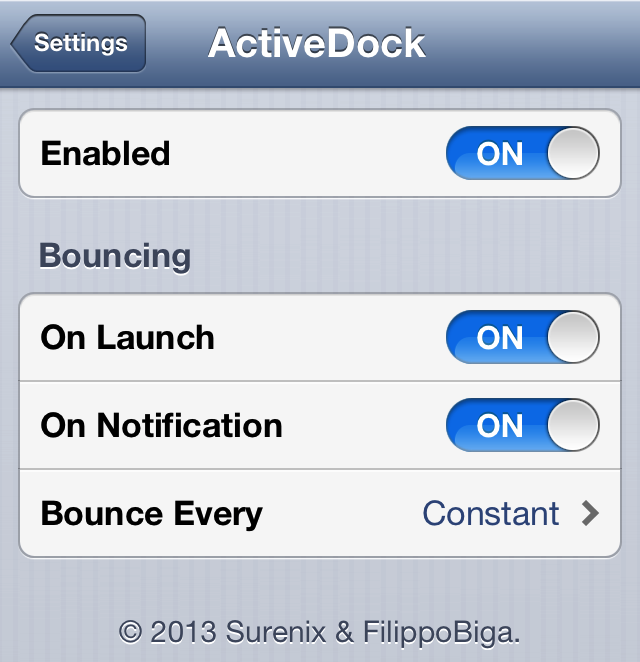 Either of the bounce settings can be enabled or disabled independently of one another. ActiveDock contains an interval setting for the frequency of bounces too. These include Never, Constant, 30 seconds, 1 minute, 1.5 minutes, and so on. I found the bounce indicators to be nice for the notifications, but as a personal preference, I wasn’t too found of the bounce on launch. That’s because the bounce on launch adds a bit of a delay to launching apps due to the bounce animation. Not a big deal, but it’s something to take note of.

While there’s currently no set in stone date for ActiveDock’s release, I will say that the tweak feels pretty much complete. Obviously, there’s room to add more options to ActiveDock’s feature set, but something tells me that the duo behind this tweak have a simple affair in mind. Upon release, ActiveDock will be available for $1.99 on Cydia’s BigBoss repo. Let me know what you think about it in the comments below.