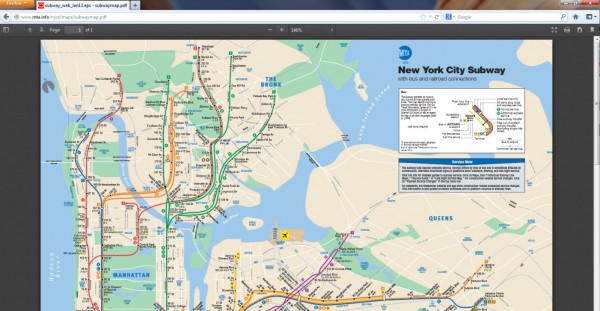 The Firefox browser by Mozilla, the non-profit organization, was once hailed as the biggest threat to Internet Explorer’s dominance, but boy do times change fast.

In just a few short years following its release, Google’s Chrome has become the most popular browser out there. And while Firefox certainly doesn’t lack a punch, it does fall behind Google’s baby in several aspects.

I’ve always loved Chrome’s built-in Adobe Flash player (because it doesn’t pollute the entire system with Adobe’s buggy plug-in). Another Chrome feature I love: a nice PDF viewer, also built-in. Starting today, a new major release of Firefox for Mac, Windows and Linux is available for download and it comes with a built-in HTML5-based PDF viewer, just like Chrome…

Well, try pulling that New York subway schedule or clicking on a PDF document on a web site. The benefits of a built-in PDF viewer become immediately apparent: rather than hang in there as the resource-hungry Adobe Reader browser plug-in takes over the browser, the new Firefox nearly instantaneously renders the document.

For example, you can use the PDF viewer to check out a menu from your favorite restaurant, view and print concert tickets or read reports without having to interrupt your browsing experience with extra clicks or downloads.

The PDF viewer makes use of the standard HTML5 APIs. It’s really fast, even faster than the really speedy PDF browser plug-ins like Foxit Reader or Sumatra PDF.

If you ask me, that’s how all browsers should be.

I never understood why in the 21st century anyone requires a proprietary plug-in to watch some web video or read PDF documents. Those plug-ins only add up to the overall browser load and eat up system resources.

Worse, plug-ins introduce new attack vectors for hackers, as blatantly highlighted by today’s news of a Facebook-like breach at Apple that exploited a vulnerability in the Java plug-in for browsers.

Firefox 19 is a free download for Mac OS X, Windows and Linux in more than 70 languages right from Mozilla. If you already have a previous version installed, you can get the latest available update by choosing the About Firefox menu item.

Still missing in Firefox: the Pin Tab feature from Chrome (Mozilla, you reading this?)