Mozilla, the non-profit organization behind the Firefox browser, on Tuesday released a new version of the software that finally brings out Retina support. Firefox 18, now available for download from Mozilla, adds support for Apple’s high-resolution Macs nearly six months after Google’s Chrome browser. In addition to the crisp UI elements on Retina Macs, Firefox 18 also enables significant speed gains for JavaScript web apps. Firefox 18 is compatible with OS X 10.6 Snow Leopard or later, and requires at least 512 megabytes of RAM and 200 megabytes of hard drive space…

Mozilla writes in a blog post that Firefox 18 brings advances to Firefox’s JavaScript compiler, now re-christened as IonMonkey and making web apps and games perform up to 25 percent faster.

Despite Mozilla’s declining market share as more Firefox users defect to Google’s Chrome, it’s still a nice and relevant piece of software. In a reversal of the prior trend, I now find Firefox increasingly snappier than Google’s Chrome. 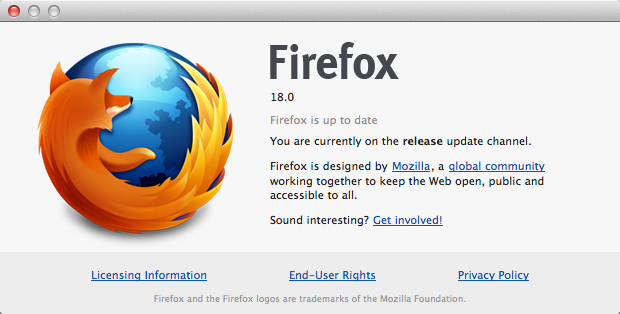 Google’s browser in fact is slowly but surely becoming bloated beyond my comfort level as Google continues to cram more features into it at the expense of performance.

With Chrome crashing increasingly on me, I recently installed Firefox.

Though I did not immediately fell in love with Firefox again, I’m finding myself using it a few times a day now, especially under high load when Chrome tends to bring my MacBook Air crawling to a halt more spectacularly than Firefox does.

I should also say this: on my system, the absolute winner is Apple’s Safari which in Mountain Lion totally screams.

This is especially evident when scrolling up and down iDB’s home page.

In Safari, the scrolling is crazy smooth and fast, thanks to significant under the hood tweaks, GPU-accelerated engine and some platform benefits enabled by Mountain Lion.

By comparison, Chrome in those same situations stutters evidently as page elements load in the background.

And as scrolling becomes an unwieldy affair in Google’s browser – especially with a couple dozen tabs open – I’m often forced to switch to Safari halfway through the day, usually when important news breaks that needs to get out as quickly as possible.

The only reason why I haven’t made Safari my default work browser: lack of the Pin tab feature from Chrome (Apple, you listening?)

What’s your browser of choice?