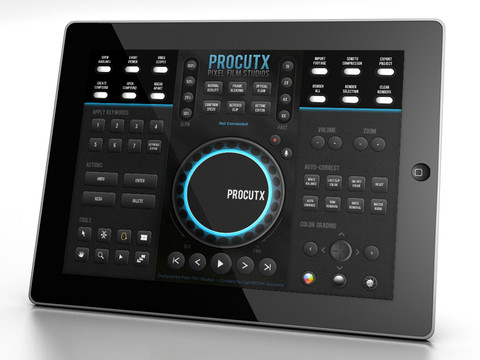 Here’s something that I think our own Jeff Benjamin might love a lot. Pixel Film Studios has launched its first iOS app, ProCutX (developed by Lightwork Solutions), which allows video editors to control Final Cut Pro X on their Mac through an iPad. As you can see for yourself, the user interface replicates pro video editing consoles that people who are serious about film making use in conjunction with the Final Cut Pro X software…

Built from the ground up to meet the needs of today’s creative editors, ProCutX breaks free from the menus and tabs to streamline editor tasks.

This application gives users control over all the FCPX editing tools in one clean interface, eliminating the need for clicking and searching through the Final Cut Pro X menus.

From import to export, ProCutX can control every step of the FCPX editing process.

It also provides fast access to Final Cut Pro X tools on your Mac, has the ability to record voiceovers and features shortcuts to import, export and rendering features. Multichannel audio editing along with streamlined sharing is also supported. 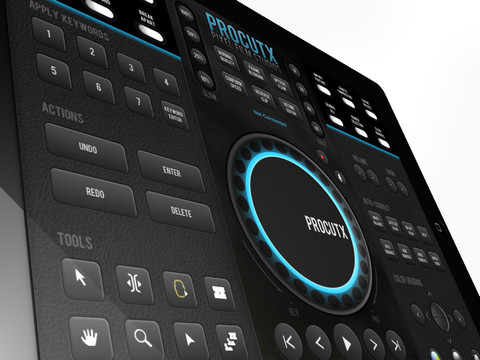 ProCutX clearly isn’t for everyone.

But if your video editing needs go beyond iMovie and you know your way around Final Cut Pro X, definitely consider giving ProCutX a try.

Pixel Film Studios told AppleInsider that an update with new features is in the works, including “Siri-like voice command capabilities and support for multiple iPad integration, allowing users to separate tasks such as color grading, audio controls and effect controls”.

Note to owners: an app like this deserves a splashy promo video.

ProCutX is compatible with iPads, requires iOS 5.1 or later and will run you $25.