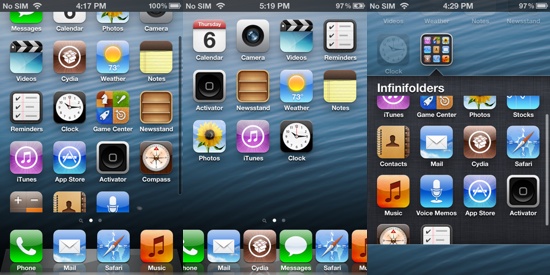 The Infiniapps are some of the most popular tweaks on the jailbreak scene. There’s Infinidock, which lets you add more icons to your iOS dock, Infinifolders, which does the same thing for folders, and Infiniboard, which adds vertical scrolling to your Springboard.

If you’re a fan of the trio, you’ll be happy to know that Chpwn has recently updated all three of them to support iOS 6. In fact, he’s completely rebuilt them from the ground up to eradicate long-standing bugs, and improve the stability and performance of the tweaks…

“today I’m releasing new versions of all of the Infiniapps, rebuilt from the ground up for iOS 5 and iOS 6. But while the core is brand new, all of your favorite features, settings, and purchases are still there, and everything should seamlessly carry over into the new versions. I also added a few new features — scrollbars and bouncing settings are now an option in Infinidock, for example — and new features should be much easier to add in the future.

Another big focus was fixing a number of longstanding bugs, for both stability and performance. Also gone is a little secret I’ll let you in on: until now, the Infiniapps were never really unlimited. There’s always been a hidden cap (for performance reasons), somewhere between 50 and 200 icons. With the new architecture, though, performance is barely affected by the number of icons, and I’ve made it truly unlimited.”

What it came down to was the code in all three apps was based on the same code Chpwn wrote for Infinidock back in January of 2010, so needless to say, it was getting a bit long in the tooth. With this in mind, Chpwn decided to clear the slate and rebuild everything.

Developers continue to update their jailbreak apps and tweaks for iOS 6, despite the fact that there is currently no untethered jailbreak for the firmware. The last we heard, hackers were making good progress on that front, but are no where near a public release.

If you happen to be lucky enough to be running a jailbroken device though, you can find all the new 2.0 Infiniapps in Cydia. And for those interested, Chpwn says he has also updated Voice Activator and Zephyr for iOS 6, and is working on updating Gridlock.