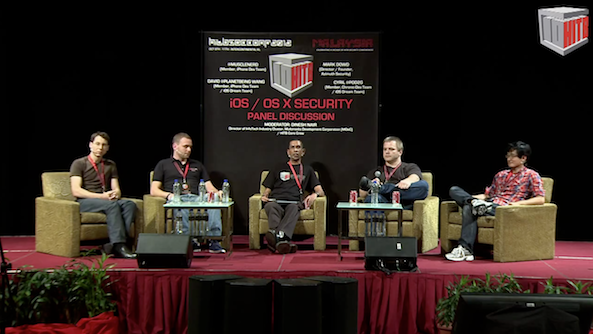 A little over a month ago, Pod2g, MuscleNerd and other hackers held a panel discussion at the Hack in the Box conference in Kuala Lumpur, Malaysia. A few topics were mentioned, but the focus of the talk was jailbreaking.

We already posted a 30 minute excerpt from the discussion, but it was missing some interesting stuff. So we were happy to see a video of the full hour-long talk uploaded yesterday, and we’ve got it for you after the break…

Again, on stage from left to right is Mark Dowd, also known as mdowd, pod2g, HITB’s l33tdawg, MuscleNerd and planetbeing. With the exception of l33tdawg, these are the guys that are working on the iOS 6 jailbreak.

The entire video is worth watching, but here are some of the more noteworthy points:

As usual, we’ll post more information about the iOS 6 jailbreak as it comes through. So stay tuned!