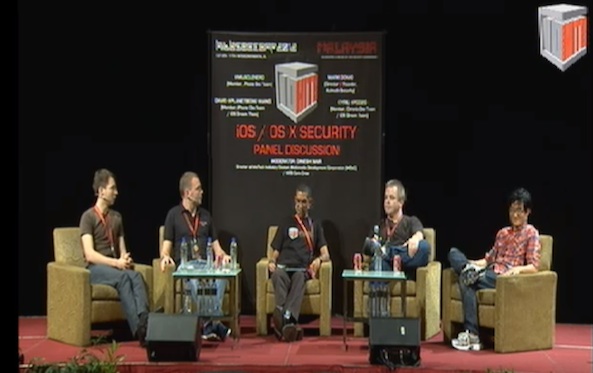 Earlier this month, we told you about an interesting panel discussion that was going to take place at the Hack in the Box conference in Kuala Lumpur, Malaysia. The panel consisted of MuscleNerd, pod2g, and other well known hackers. And they were going to be discussing iOS security.

But if you missed the live stream, never fear. The folks over at HITBSecConf have uploaded a video of the entire 30 minute long discussion and we’ve got it posted for you after the break. If you haven’t seen it yet, it’s really worth watching. There’s a lot of interesting jailbreaking info…

On stage from left to right is Mark Dowd, also known as mdowd, of Azimuth Security, pod2g, MuscleNerd and planetbeing. And a lot of eyes are on these four intelligent guys as the jailbreak community anxiously awaits an announcement for iPhone 5 and iOS 6 exploits.

On that front, hackers are making some progress. Yesterday, planetbeing tweeted that after some fancy work with a kernel exploit, he had tweaks up and running on his iPhone 5. He almost has a full tethered jailbreak for the device, though at this point, he says it still requires a developer account.

If you have any further questions about jailbreaking, make sure to check out our post on the State of the iOS 6 jailbreak.