The App Store launched in the summer of 2008 with 500 apps. Though late Apple co-founder Steve Jobs initially resisted opening the iPhone to developers, the store went on to change the device from a simple cell phone into a powerful mobile computer. Thirty-five billion downloads later, Apple has progressed to pay a total of $6.5 billion to developers in app revenue after taking a customary 30 percent cut of the action.

But of the more than 700,000 apps now available on the App Store – or a ‘candy store’ as tech columnist David Pogue nicknamed it – including more than 275,000 apps designed specifically for iPad, only a small selection turned their makers into instant millionaires.

The vast majority of developers barely break even. And of those who turn notable profits, not many quit their day jobs. Yet, the dream of becoming a millionaire overnight with a hit app lives on. So what’s wrong with this picture?

People who did dedicate themselves to writing apps full-time more often than not regret leaving the security of their regular income, health insurance and retirement plan. When the reality sets in, it’s usually too late to realize that the gold rush is long over. 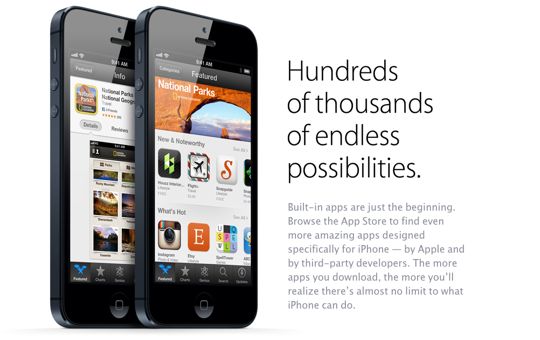 With apps for just about anything, conceiving a novel idea is now tougher than has ever been. Competition is fierce and even the most potent app concept is no guarantee of success as hordes of fellow developers quickly jump on the opportunity to exploit your ingenious idea. Thereby, the niche market you carved for yourself soon gets infested with dozens of similar apps, many offered free of charge.

The article notes that in 2010 there were more than a million computer software engineers in the country, which included app writers. The figure outnumbers farmers and has almost caught up with lawyers.

Some of the highlighted success stories include Ethan Nicholas, who earned $1+ million in 2009 after writing the iShoot game for the iPhone.

On Monday, he quit his job. By March, he had earned more than $1 million. “Sheer dumb luck and being in the right place at the right time,” he said.

Wouldn’t we all be this successful?

But there’s another facet to his story.

Nicholas then formed a company with a friend. “We were going to make another million or two”, he said. Turned out none of their new games sold like iShoot so the entrepreneurs turned to developing apps for the health care industry.

Mr. Nicholas has cautioned his new colleagues about easy money. “The time for that has passed,” he said.

Mr. Nicholas has the same philosophy about Apple now as he did when he wrote iShoot. “I’d rather get 70 percent of a large pie than all of a small pie,” he said.

I’d definitely add the Pusetic brothers on the list of extremely successful developers.

Here’s a video interview with the brothers from August (sorry, Flash-only – talk to AllThingsD!)

But no matter how you look at it, the simple truth is that the app economy is one weighted heavily toward a few winners. It’s as cut-throat a biz as any other. And some people are eager to resort to dubious practices in order to turn a quick buck.

For example, over at Google’s Play Store market for Android a bunch of fake paid apps from Apple Inc surfaced earlier this week. Google removed these within hours, but inevitably a certain potion of less experienced users took the bait and filled the pockets of this rogue developer.

The NYT story also offers several examples of people who cashed in their 401(k), in addition to selling their houses, cars and borrowing money from relatives in the hope of striking it rich making applications for the iPhone and iPad.

My favorite choice quote includes Shawn Grimes whose amateur apps pulled in more than $5,000 from Apple. After the engineer got laid off late last year, he along with his wife decided to work independently by writing apps for the overcrowded Apple platform.

The couple aimed for one new app a month, but progress was slow and sales were slower. In March, with the apps bringing in only about $20 a day, they cashed in Mr. Grimes’s 401(k), which yielded $30,000 after taxes and penalties. They had already spent the severance from his job at Legg Mason.

Soon, though, it got to the point where Mr. Grimes needed to take on freelance work, which brought in crucial income but took time away from Campfire Apps. By the beginning of summer, troubled by several persistent health care issues, he surrendered to the need for a full-time job.

Putting two and two together, the Grimeses’ adventure cost them $200,000+ in lost income and savings. Their eight apps earned them just $4,964.

Part of the blame for the Grimeses’ unrealistic expectations is on Apple itself.

Every media event the company puts on contains the obligatory App Store milestones meant to woo developers. Here’s Steve Jobs talking about the App Store in 2010.

And even if club Cupertino makes no promises to developers willing to devote their resources to building apps for iPhones and iPads, the App Store is aggressively promoted as a money-making machine.

Look no further than Steve Demeter, the brains behind the Trism puzzler. The game netted the young developer a cool $300,000 within a few months of the App Store’s 2008 launch. Apple couldn’t resists highlighting his success story in a WWDC promo video seen below.

CEO Tim Cook recently called Apple “a jobs platform” and the company told the paper it’s “incredibly proud of the opportunities the App Store gives developers of all sizes”, but declined to answer questions.

A TechNet study found that app economy, which includes both iOS and Android, has sparked an impressive 466,000 new jobs in the last four years in the United States alone. And as Apple is keen to point out, the iOS app making biz is directly or indirectly responsible for the creation of a half million jobs in the country.

That doesn’t change the fact that the overwhelming majority of apps struggle to gain traction. Blame it on the app discovery process, critics say as they slam Apple for favoring only the top-selling software. Meanwhile, apps that don’t make it into one of the App Store charts have little success of gaining the kind of recognition that moves the needle.

The iPhone maker did acquire app discovery engine Chomp in February and as a result shut down its services as Chomp engineers moved to Cupertino offices to presumably help improve app discovery on the App Store. 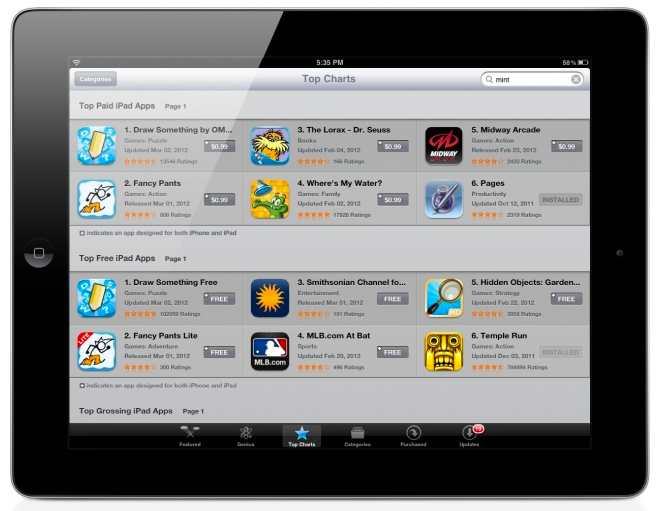 The App Store storefront on the iPad

But apart from a few overdue tweaks here and there and new layouts, the App Store remains a mess when it comes to finding apps tailored to each user’s needs. Google’s Play Store, while providing more powerful search features and accessible web portal, is plagued with the same problem.

The issue comes down to a simple fact: it’s very tough to come up with a solution that will enable people to find a needle in the haystack. Browsing more than 700,000 items is a pain on full-blown desktop computers, let alone on tiny smartphone screens.

Yes, specialized apps for finding apps help alleviate the problem a bit. But until Apple comes up with a completely different approach, the App Store app discovery process is going to continue rewarding the highest-grossing apps at the expense of makers who aren’t so fortunate to have Angry Birds, Instagram or Camera+ and in their portfolio.

Wrapping up, it’s interesting how Steve Jobs originally hesitated opening up the iPhone to third-party developers. At the end of the January 2007 iPhone introduction, he told developers to use standard web technologies to build WebApps for Safari.

And guess what? There’s no SDK that you need! You’ve got everything you need if you know how to write apps using the most modern web standards to write amazing apps for the iPhone today.

So developers, we think we’ve got a very sweet story for you. You can begin building your iPhone apps today.

Here’s a short clip with that quote:

We know how that adventure ended.

Walter Isaacson’s bio book on Jobs lets us in on the behind-the-scenes arguments and persuasion that took place at Apple:

Apple board member Art Levinson told Isaacson that he phoned Jobs “half a dozen times to lobby for the potential of the apps,” but, according to Isaacson, “Jobs at first quashed the discussion, partly because he felt his team did not have the bandwidth to figure out all the complexities that would be involved in policing third-party app developers.”

Jobs eventually warmed up to the idea so Apple embraced the App Store. Soon after, the mobile bazaar became the central theme around the wildly successful “There’s an app for that” advertising campaign.

Which brings me to my final point: the world would have definitely been a much different place today had Jobs not relented and listened to reason.

Care to extend an opinion?