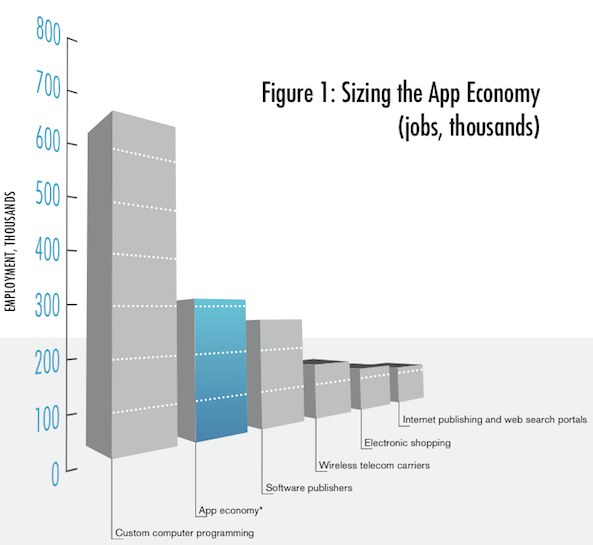 We all know developers are hard at work to create our favorite apps. With over 500,000 apps currently on the iTunes App Store alone, there is sure to be a ton of developers that need to create these apps, and make a living in doing so.

According to a new report released today from TechNet, the “App Economy” — which includes both iOS and Android — has sparked an impressive 466,000 new jobs in the last four years in the US alone. Obviously being the first to launch a market place for apps, Apple is the leader of this booming app industry…

Nothing illustrates the job-creating power of innovation better than the App Economy. The incredibly rapid rise of smartphones, tablets, and social media, and the applications—“apps”—that run on them, is perhaps the biggest economic and technological phenomenon today. Almost a million apps have been created for the iPhone, iPad and Android alone, greatly augmenting the usefulness of mobile devices. Want to play games, track yourworkouts, write music? There are a plethora of apps to choose from, many of them free.

The report also revealed that the New York area and San Francisco are the top-two regions for finding a job in app development. With companies like Zynga and Facebook who rely on apps extensively, it’s obvious why this region has such a large amount of job openings for developers.

We have also seen the term “app” become more and more universal as more consumers have smartphones in their pockets. In 2011, the amount of ads that mentioned the word “app” was 45% higher than 2010. Interestingly, the growth for app development slowed down a little in 2011, but perhaps with the rumored launch of the iPhone 5 this Spring, apps will be created at a faster pace.

During its earnings call last month, Apple revealed that they have payed developers a whopping $4 billion since the launch of the App Store in 2007. The app development industry is looking like it’s headed in the right direction. Don’t you agree?