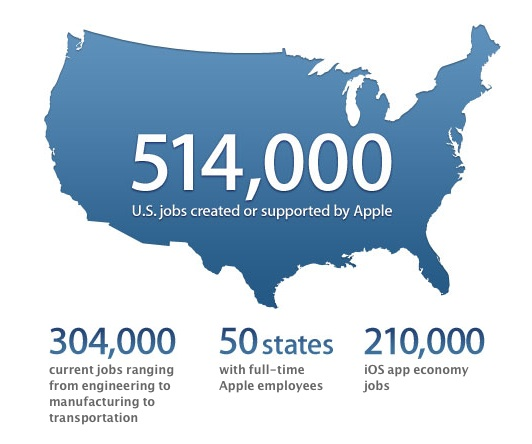 Apple has been the subject of much ire and speculation over its perceived lack of support for the United States and its scarcity of jobs, but now the company is hitting back with a few choice numbers it believes shows that the opposite is in fact, true.

Apple notoriously gets all its products from Foxconn in China, with Brazil now also becoming a source for all those devices with an Apple logo on the back. This has led to Apple being on the receiving end of much bad press over labor conditions at Foxconn’s factories as well as the question being raised of why doesn’t Apple build its products on US soil.

But as Apple is keen to point out, the iPhone and iPad maker does actually have its fingers in many US-based pies, creating and sustaining over 500,000 jobs in the process…

Apple’s figure of 514,000 jobs based around the Apple eco-system is broken down into two distinct categories. According to the company, 304,000 jobs are directly attributable to Apple or its close business partners, and a further 210,000 jobs are part of the “iOS app economy.” That’s developers, to you and me.

The numbers at a glance

Apple is clearly upset at accusations that it does not fully support the US economy, and has such seen fit to put an entire web page up in order to defend itself. The fact that Apple need defend itself at all is an interesting one, and one that will be debated by many regardless of these figures.

Does the release of these numbers change your opinion on Apple and its business practices?