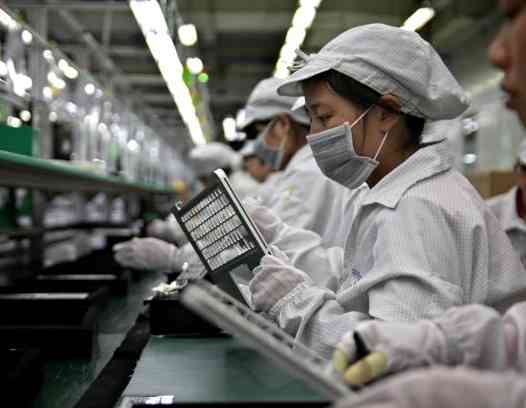 In a special edition of ABC’s Nightline program last night, correspondent Bill Weir traveled to Apple’s main manufacture, Foxconn, to get an inside look at working conditions inside of the plant. During the program, Weir showed workers working on the assembly line, the dormitories they live in, and more.

Apple, Foxconn, and the FLA have today released statements to ABC regarding a few of the things said during last night’s program. Apple responded to a claim one worker made, after she said that she carves the aluminum shavings from 6,000 iPad logos per day…

“In manufacturing parlance this is called deburring. Her line processes 3,000 units per shift, with two shifts per day for a total of 6,000. A single operator at Ms. Zhou’s station would deburr 3,000 iPads in a shift.”

Apple told ABC there was no way the worker could have carved a total of 6,000 logos, because that’s how many are done in a full day. 6,000 carved could only be achieved if the worker worked two 12-hour shifts, which isn’t possible. There are two 12-hours shifts in one day at Foxconn — 8 AM – 8PM and 8 PM – 8 AM — and each worker works one. She most likely did around 3,000 in her single shift, and she was most likely got confused about the question asked.

Foxconn responded to ABC’s program with a correction over their claim that workers starting pay is too low for a Chinese payroll tax withdrawal. Foxconn told ABC, “Your statement is only true when applying to the entry-level workers while over 75 percent are already over the probation and earning more than 2,200 RMB basic salary.”

Apple has allowed the Federal Labor Association inside the Foxconn doors to do an inspection. The FLA was profiled during ABC’s program, where it said Apple and the FLA were in conversation for five years. The FLA corrected ABC’s statement:

“The discussions began in April 2007 but stalled in March 2008. We then resumed them in April 2009 and decided to do a small pilot survey so that Apple could get an idea of how our tools might add value to their program. That pilot led to a second activity that I believe contributed to the decision to join the FLA at the end of 2011. I, of course, cannot speak for Apple but I do believe that the decision to join was probably taken some months before (and therefore well before) the New York Times articles.”

Last night, I posted my views on ABC’s program. Overall, it didn’t expose anything too terrible. As the program started off, Bill Weir said that they didn’t find any egregious violations.

The FLA is set to publish their full report on Foxconn’s working conditions in the coming weeks. Some claim their report may be less unbiased than ABC’s.

You can view ABC’s full iFactory documentary on their website.