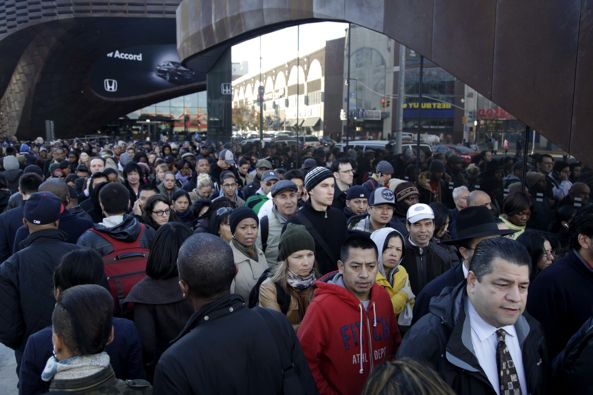 The iPad mini went on sale this morning in 34 countries and it looks to be off to a pretty solid start. Now, much ado is being made about lines not being as long as during past product launches. This is understandable: after all, the iPad mini launch is somewhat subdued because of the fallout from Hurricane Sandy. Still, eager fans reportedly visit flagship Apple stores in considerable numbers to pick up the new device which most reviewers deemed an attractive buy.

In New york, in about two hours the iPad mini sold out at Apple’s flagship Manhattan store on the Fifth Avenue. In case you’be been wondering about the headcount, Fortune’s Philip Elmer-DeWitt reports of more than 800 customers standing in the line by the time the 10am countdown began. So much about “disappointing crowds”…

Philip Elmer-DeWitt has the story:

But shortly before 8 a.m., when the store usually opens for a new launch, I had a headcount of 550. According to the records Piper Jaffray’s Gene Munster has been keeping since 2008 (see below), that’s more customers than turned out for the iPhone 3G, iPhone 3GS and iPhone 4S.

He also took a nice shot of the line outside Apple’s trademark glass cube in New York.

And here’s DeWitt’s video of walking the iPad mini line at the Fifth Avenue store.

And the obligatory countdown.

This being Apple’s flaghship store, a near-record turnout was expected.

From what we’re hearing, most of Apple’s other stores around the country don’t have anyone in line.

We’re curious to learn about the turnout at your local Apple store so fill us in on the situation down in the comments.