Samsung Electronics, the flagship subsidiary of the Samsung Group and the world’s largest technology company by revenues since 2009, reported earnings for the September quarter and the results are staggering. Year-on-year profit rose 91 percent as the company brought home $5.9 billion in net profit on $47.6 billion in sales, a 26 percent increase.

While Samsung has a long way to go to match Apple’s profitability, it’s been growing at a faster clip: Apple’s net profit in the September quarter grew 25 percent versus 91 percent for Samsung. No matter how you look at it, Samsung Electronics, which has headquarters in Suwon, South Korea, is evidently on fire. Does it stand a shot at beating Apple on profitability down the road?

Samsung in a media release attributed its performance mainly to “increased sales of handheld phones and stronger demand for display panels”, with its mobile arm accounting for more than half of total revenue.

The company didn’t break down tablet and smartphone sales for competitive reasons. According to market research firms ABI Research and IDC, Samsung shipped about 57 million smartphones in the third quarter. That’s most smartphones anyone has ever shipped in a quarter. 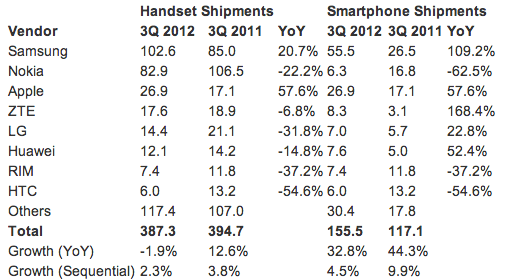 Senior VP Robery Yi expects market competition to intensify but “we will do our best to sustain our earnings momentum throughout the fourth quarter by implementing strategies we have developed for our businesses”.

By the way, Samsung Electronics is now a Galaxy company much as Apple is an iPhone company: nearly two-thirds of profits came from its mobile division.

Also helping with profitability: increased shipments of OLED and LCD panels for tablets and smartphones. Apple used to predominantly buy mobile displays from Samsung, but amid an ongoing legal fight switched orders to rival LG Display. Apple is also sourcing panels from Sharp, with LG Display now a prime supplier of Retina panels.

The flagship Galaxy S III handset is likely the biggest growth generator for Samsung. It sold 20 million units in the first hundred days of availability. Samsung is looking to ship as much as 30 million units by year’s end.

The company is also rumored to build a brand new Google-branded Nexus tablet due for an October 29 announcement. If you’re interested, Google Senior VP of engineering Vic Gundotra posted vacation photos on Google+ taken with a Nexus 10 prototype.

A leaked manual suggests that the Nexus 10 will differ in industrial design from the Nexus 7, which is built by Asus. Of interest: a Federal Communications Commission filing suggests a 3G variant of the current seven-inch Nexus tablet is coming soon.

Is Samsung on fire or what?