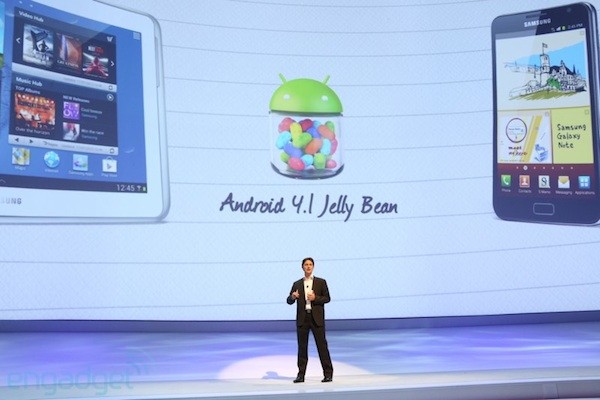 Samsung took the stage today at the annual IFA show in Berlin, Germany to unveil a slew of new devices. The keynote was the first in a long line of scheduled product announcements leading up to Apple’s September 12 iPhone event.

Among the new gadgets Samsung debuted this morning was the long-rumored Galaxy Note II. The device follows up a fairly successful Galaxy Note, which had the internals of a smartphone and the form factor of a mini tablet.

And now, it’s even bigger…

The Galaxy Note 2 houses a massive 5.5-inch display, up from the 5.3-inch one in last year’s model. The screen is still of the Super AMOLED variety, with the same 1280 x 720 resolution. Though thankfully the Pentile tech is gone.

The phablet now runs on Samsung’s 1.6 quad-core Exynos processor, similar to the one used in the Galaxy S III. In fact, there are a lot of similarities between the two devices. They share the same 2GB of RAM, the same 8MP camera, and several design elements. The Galaxy Note 2, however will be shipping with the latest version of Android (4.1).

The folks over at TechnoBuffalo got some hands-on time:

As aforementioned, the first version of the Note did pretty well with customers. Earlier this month, Samsung announced that it had sold 10 million of the stylus-laden devices worldwide. But whether it can do it again or not is still questionable.

In addition to the Galaxy Note 2, Samsung took the wraps off a number of other new devices today. Among those were a new Windows Phone 8 handset, the Ativ S, and a handful of familiar-looking Windows 8 tablet-laptop hybrids. 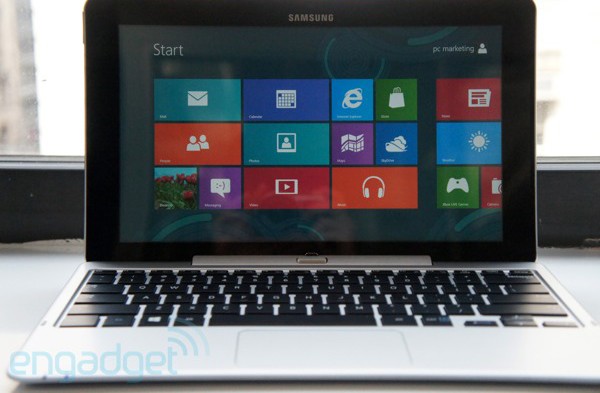 But perhaps most interesting new product of the day was the Galaxy Camera. It’s one of the first few devices in a new gadget category that marries a beefed up point-and-shoot camera with a mobile operating system. The Galaxy has a quad-core processor, 4.8-inch HD LCD display, built-in Wi-Fi 3G, and 4G cellular options, and comes with Android 4.1. installed.

On the actual camera side of things, the Galaxy has a 16MP sensor and a 21x optical zoom. The benefits of combining these features with built-in wireless connectivity are obvious — imagine being able to snap, edit and upload photos to the web from such a camera, without ever having to connect to a computer. It looks good on paper for sure.

To give you a better understanding of what the Galaxy Camera is, here’s TechnoBuffalo again with a hands-on video:

With this being a brand new category of device, it’ll be interesting to see how consumers react to it. Will they be able to leave their smartphone at home and just carry this around? But even then this thing is still pretty bulky. And how long before larger camera sensors and better zoom capabilities make their way into smartphones? So many unknowns here.

At any rate, all of the above-mentioned products are expected to be on the market by the holidays this year. But so far, there’s no other word on pricing or availability.

So, what do you think? Will Samsung’s Galaxy Note 2 be another hit? What about the Galaxy Camera?