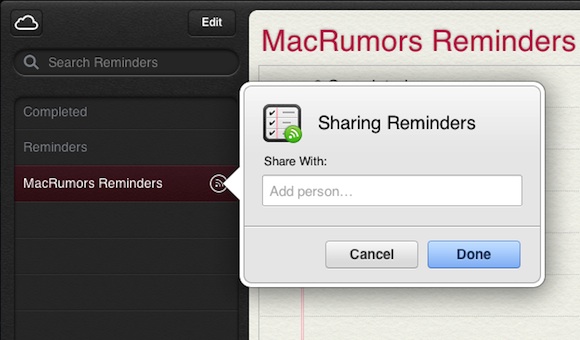 Apple unveiled the iPhone 5 on September 12 and the following day updated the iCloud.com web interface by dropping the Beta flag and introducing the new Notes and Reminders web apps with cloud notifications enabled. Today, club Cupertino improves upon its cloud-based suite of services by adding shared reminders to the Reminders web app on iCloud.com.

You were able to set up shared reminders using Reminders on OS X (not via the stock iOS Reminders app, though), but those wouldn’t sync with the web interface. Today’s update is a minor but important one as it finally provides for a more seamless sync of reminders across devices, though not yet perfect…

MacRumors first spotted the change and provided the above screenshot, noting:

OS X Mountain Lion users have been able to share reminders via the native Reminders app as of OS X 10.8.2, but Windows users and others needing to access iCloud via the service’s website have been unable to set up new shared reminders. The feature is also missing from the Reminders app in iOS 6.

I used to tap third-party reminder apps before, but now solely depend on Apple’s Reminders app because it looks slick, is easy to use and syncs across devices without any effort on my part.

I’m not a heavy user of shared reminders, but certainly emphasize with business folks not being able to share reminders on their iOS device yet. Judging by this roll-out, we can expect to see shared reminders in iOS 6 soon, with a little help from a future software update.

Do you use Reminders on your Mac or iOS devices at all?