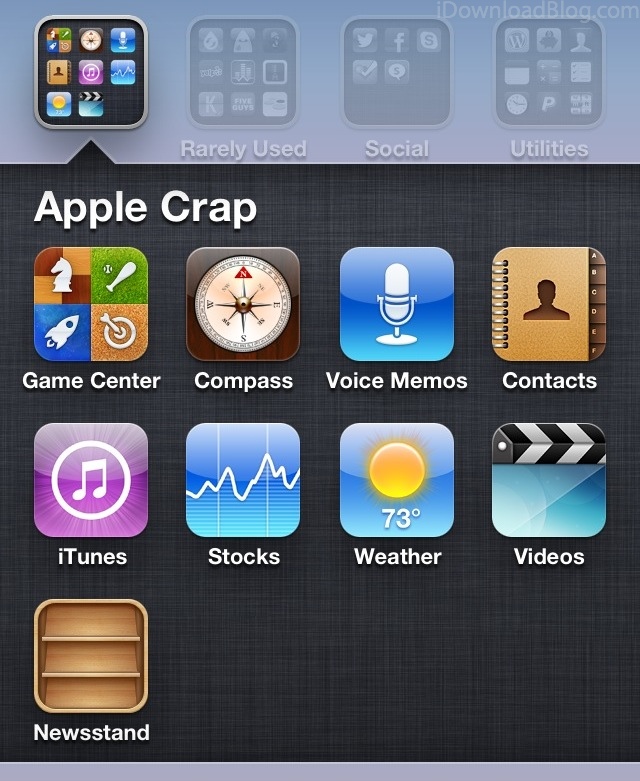 Although I occasionally use Newsstand, I can plainly see why many deem it to be worthless. Almost all of my friends have Newsstand apps that look just like the screenshot above — empty. With that in mind, wouldn’t it be great if Apple didn’t force the app upon you?

I mean, it’s not even really an app after all, it’s a folder, yet Apple forces you to keep it on your Home screen with no way to hide it. Most people who really hate the app, and don’t have the luxury of a jailbreak, relegate Newsstand to the last page of their Home screen, but this latest Mac app one-ups that solution.

Like previous tricks that allowed you to place Newsstand in a folder, Filippo Bigarella’s StifleStand does something similar. StifleStand, though, is much more easy to execute, because it doesn’t require any special timing on your part.

The best thing about StifleStand is that it doesn’t require a jailbreak, which makes it entirely possible to hide the Newsstand app on the iPhone 5, or any other iOS device for that matter. Take a look inside as I show off the easy to follow process on video…

As you can see from the video, the entire process take less than a few seconds.

To hide your Newsstand app using StifleStand, do the following:

Step 2: Plug in your iOS device running iOS 5 or higher. Make sure that StifleStand detects your device.

Step 3: Find the Newsstand folder on your device. 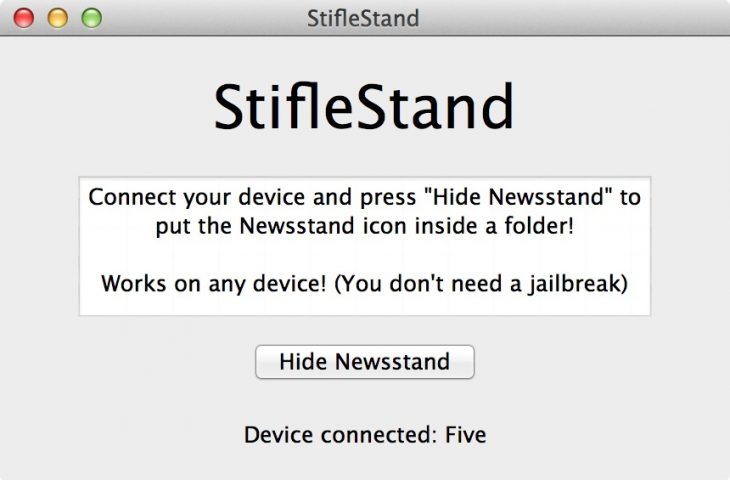 The new Magic folder behaves just like any normal folder in iOS. You can rename the folder, and populate it with additional apps. If you want to remove Newsstand from the folder, simply place your device into wiggle mode, and drag out the Newsstand app icon. You can always run StifleStand again if you wish to hide it in the future.

Keep in mind that if you’re one of the few who actually use Newsstand, then you want to keep it outside of a folder. If it’s in a folder, then trying to launch Newsstand will kick your back to your Lock screen.

StifleStand is now available from developer Filippo Bigarella. If that name sounds familiar, it’s because he’s a staple in the jailbreak community. Bigarella has developed apps like Springtomize 2, and Unlock FX. If you have a jailbroken device, be sure to check out his apps and tweaks.

As you might have guessed, StifleStand is Mac OS X only, but there might be a Windows equivalent in the future. If you’re running Windows, and you’d desperately like to hide your Newsstand app icon, you can always install a Tweak like Ryan Petrich’s NoNewsIsGoodNews, but again, you’d have to be jailbroken in order to pull that off.

What do you think about StifleStand? Do you plan on using it to hide your Newsstand app icon? If so, sound off in the comments below.

Update: Good news, Windows users. Filippo says a Windows version should be available within the next week.