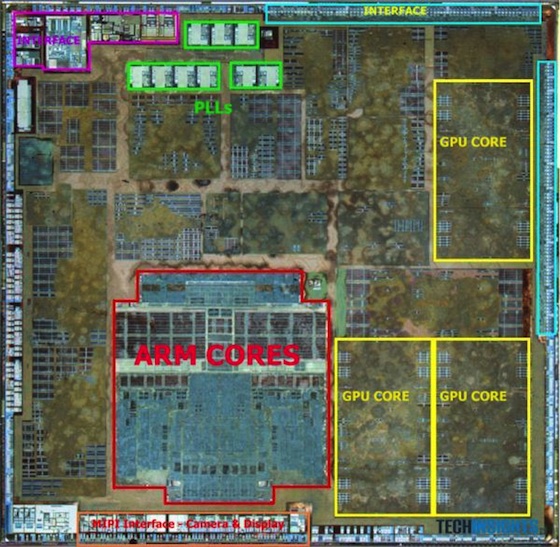 The iPhone 5 launched yesterday, and first impressions seem to be in line with the early reviews: the thing is fast. As most of you know, Apple custom-built an all-new processor for the handset called the A6.

Now that the phone is available, we expect to learn more about the new chip as teardown experts continue to rip the device apart. In fact, a new tidbit has already surfaced: the A6 has triple-core graphics…

MacRumors points to a report from AnandTech:

“Our good friends at UBM TechInsights sent over the first diffusion images of Apple’s new A6 SoC. It’s still too early to tell a lot but we have confirmation of a lot of things. The image above shows two 32-bit LPDDR2 memory channels and three GPU cores. We’re likely looking at a PowerVR SGX 543MP3 running at 266MHz.”

Apple built the A6 in-house, practically from the ground up. It’s based on a custom ARMv7- design, with dual 1.02GHz processing cores and, as we now know, three GPU cores. AnandTech says that this is the first time the company didn’t use a template when designing its SoC (system on a chip).

The processor is impressive for a few reasons. Apple was able to dramatically increase performance, without sacrificing size or battery life. The iPhone 5 finished first in both Geekbench and SunSpider benchmarks, and early battery tests found it could take 11+ hours of continuous use.

Obviously, we’ll learn more about the A6 in the coming days and weeks, as the teardowns continue. Stay tuned to iDB for more information regarding Apple’s new processor, and of course, it’s new smartphone.