The iPhone 5, sporting Apple’s custom A6 processor, is really turning some heads in the tech world. Last week it beat out the competition in Geekbench tests, and early reviews say the handset is extremely fast.

And the accolades don’t stop there. The first SunSpider Javascript benchmark, which measures Javascript performance, for the iPhone 5 was published last night. And again, Apple’s smartphone swept the field… 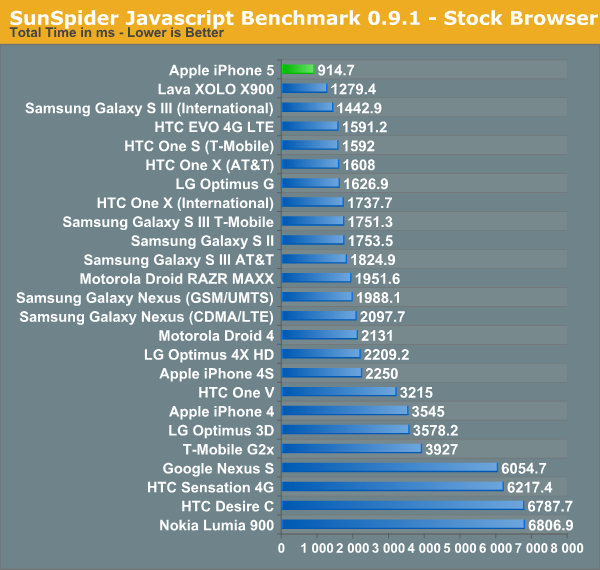 AnandTech, who published the benchmark, reports:

“The first iPhone 5 reviews have lifted, confirming the leaked Geekbench data we saw in our earlier post. Apple’s A6 appears to feature two custom ARM cores running at up to 1GHz. A new datapoint comes courtesy of our own Brian Klug who’s currently visiting LG in Seoul, South Korea. He ran into Vincent Nguyen of Slashgear fame, who kindly let him run SunSpider 0.9.1 on Vincent’s iPhone 5 review sample. The score? 914.7ms.”

Unlike most performance tests, lower is better in the SunSpider benchmark. And not only did Apple’s 914.7ms beat out the likes of the Galaxy S III and HTC’s One X, but as you can see, it wasn’t even close.

In fact, AnandTech says that this is the fastest score they’ve ever recorded on a smartphone. It’s even faster than Intel’s new Atom Z2460 processor. The site attributes the A6’s speed to improvements in its memory subsystem. Well whatever Apple did, it seems to be working.

It’ll be interesting to see how Samsung and other competitors respond to the iPhone 5 and its surprising bump in performance. HTC, in fact, is expected to announce a new device later today.