Following a detailed analysis by AnandTech which exposed the A6 chip inside the iPhone 5 as bein comprised of custom ARMv7 design rather than stock Cortex-A15 cores, someone has posted an iPhone 5 benchmark on Geekbench.

Now, the handset will hit store shelves on Friday so there’s no way to verify the authenticity of this poster (and Geekbench scores could be easily faked). If you believe the results though, the iPhone 5,2 hardware has a Geekbench score of 1601.

The test also shows an ARMv7 processor design with two cores clocked at 1.02GHz each, with 32KB of L1 instruction/data cache, 1MB of L2 cache and 1GB of RAM (Samsung’s print ad has helped reveal that tidbit)…

In other words, the A6-powered iPhone 5 in Geekbench tests more than doubles the third-generation iPad’s score and comes in at two and a half times faster than the iPhone 4S. 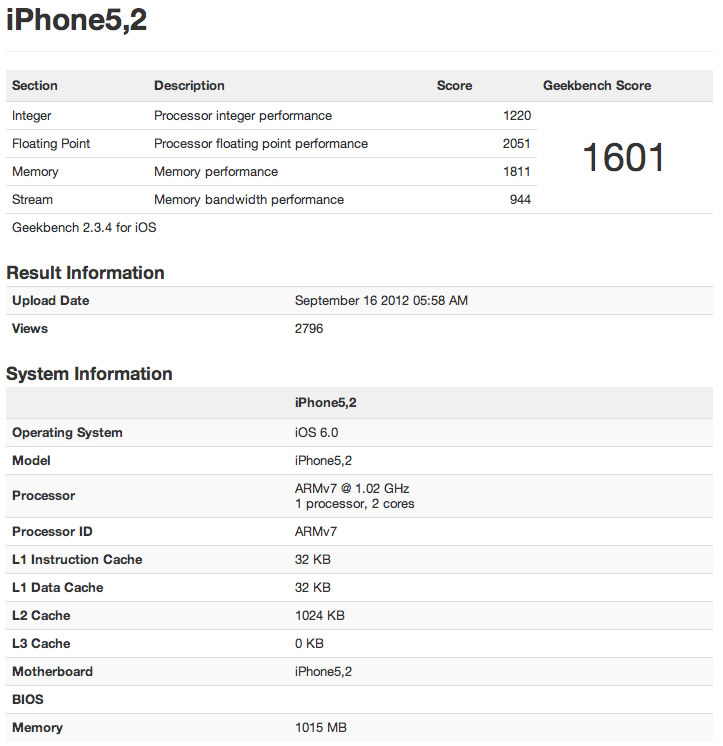 Some of that speed gain certainly comes from twice the RAM, which allows for smoother mutitasking and faster overall performance. The A6 chip packs in 1GB of RAM versus 512MB on the A5 chip found inside the iPhone 4S.

Furthermore, RAM inside the A6 chip is also clocked twice as fast: per chip verbiage, it’s 1066MHz versus RAM on the A5 chip, clocked at 533 MHz. In case you were wondering, the A6 chip uses a dual-channel LPDDR2 package with 32-bit channels. 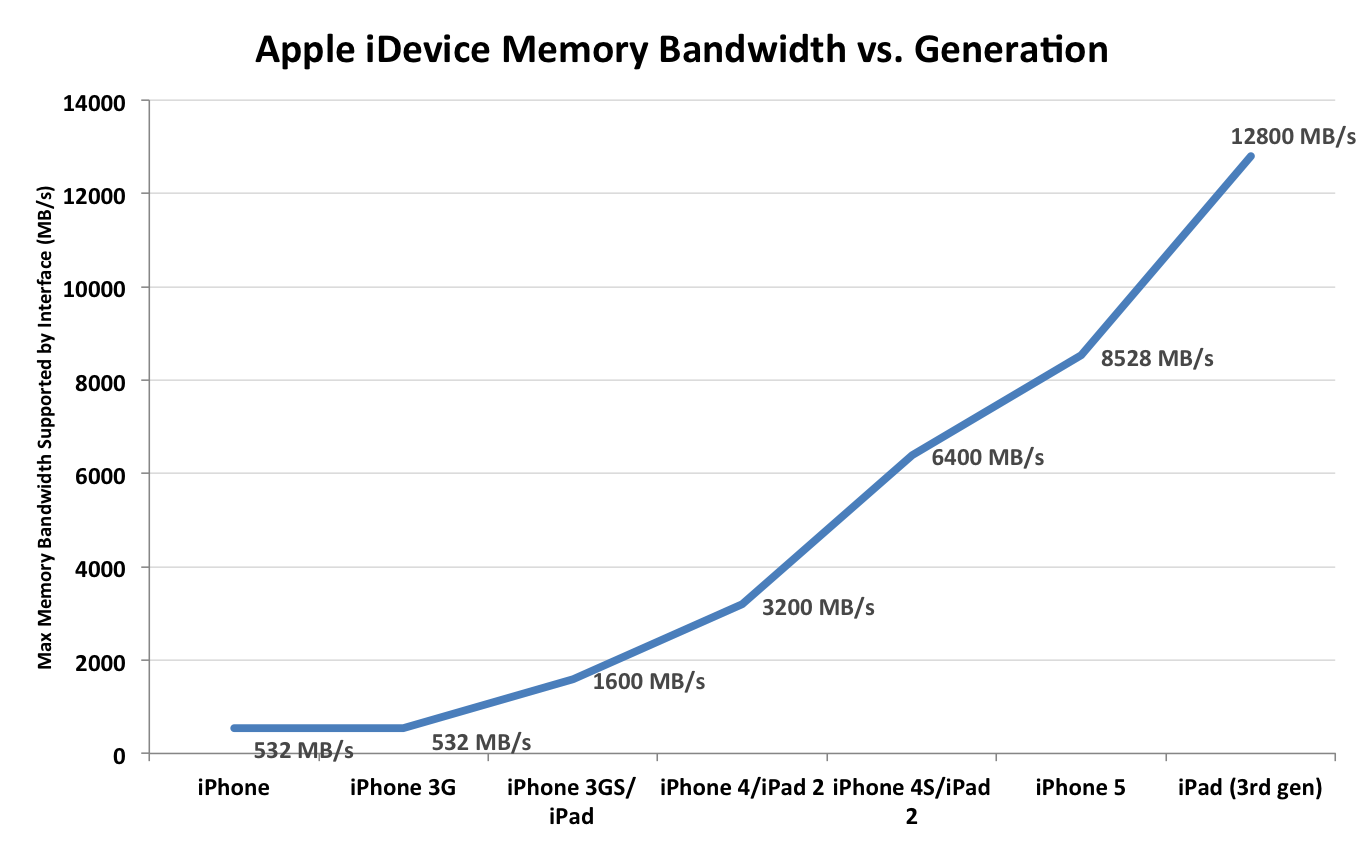 Roughly 33% more peak memory bandwidth than the iPhone 4S, which can definitely help feed the faster GPU and drive the higher resolution display.

Many vendors have been shipping LPDDR2-1066 so there’s nothing too surprising here. There’s understandably less bandwidth than in the 3rd gen iPad of course as the display/GPU requirements aren’t nearly as high.

Another factor is clock speed: the iPhone 4S CPU core is clocked at 800MHz and the iPhone 5 CPU is 1.02GHz, a substantial difference.

The A6 chip is 22 percent smaller than the A5, consumes less power and likely supports the new tweaked instruction set, ARMv7s, with support for the SIMD VFPv4 extensions.

9to5Mac has some interesting competitive observations:

And here’s how the iPhone 5 compares to previous iOS devices in terms of Geekbench scores. 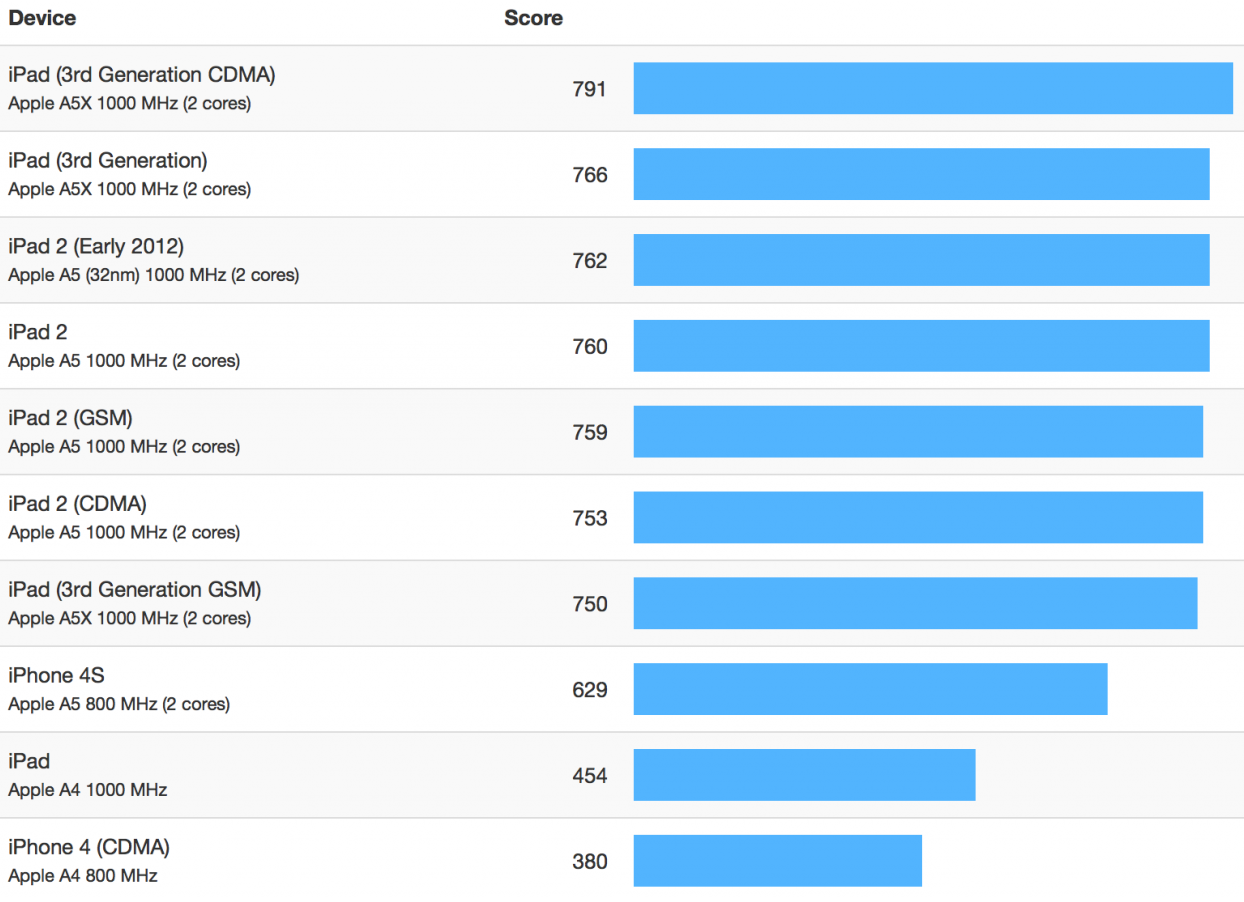 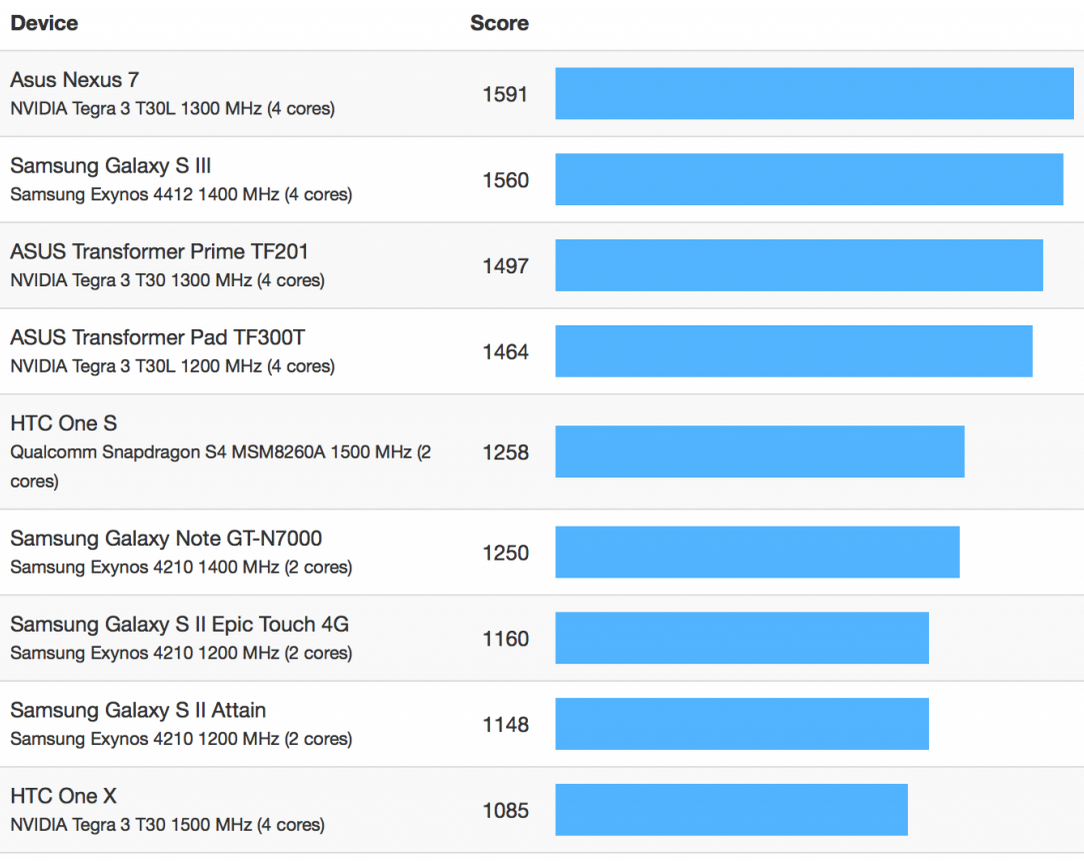 Google’s Nexus 7 tablet runs Nvidia’s quad-core Tegra 3 processor and has a Geekbench score of 1591, less than the iPhone 5. As for Samsung’s Galaxy S III, which runs a quad-core Exynos chip, it comes in at a score of 1560.

With each passing day it seems that Apple is moving towards becoming a semiconductor company as well.

Maybe it won’t build chip itself, but knowing Apple – I wouldn’t entirely rule out this possibility.