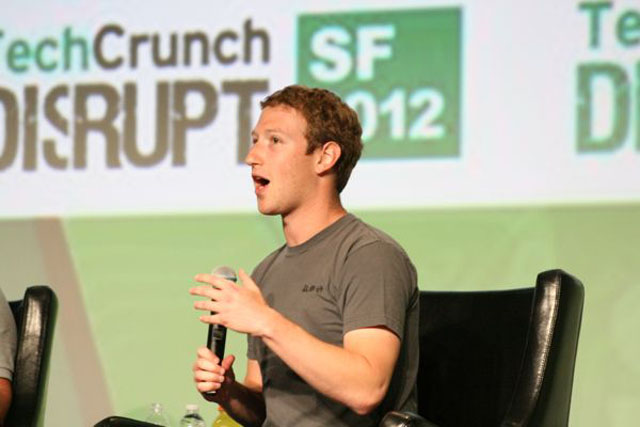 Taking a break from all the iPhone hubbub, Facebook founder and CEO Mark Zuckerberg recently sat down with tech journalist Michael Arrington for an interview at Tech Crunch’s Disrupt event.

Over the course of the conversation, Zuckerberg admitted that HTML5 was a bad way to go for Facebook’s original iOS app, discussed the possibility of a Facebook-branded smartphone and much more…

Arrington jumps into the interview by asking Mark about Facebook’s IPO (Initial Public Offering), which happened back in May, and how the company has dealt with shares dropping by more than 50% since then.

Obviously, Mark says that with Facebook’s new iOS app out and a new Android one on the way (that’s right Android fans), and iOS 6 and OS X integration on the horizon, Facebook’s future looks pretty great.

But Zuckerberg also admits that his company has made some missteps. And one of the biggest mistakes, he says, was betting too much on HTML5 (which is the language the old Facebook app was written in).

“When I’m introspective about the last few years, I think the biggest mistake we made as a company is betting too much on HTML5 as opposed to native…

…We went for this approach. We built this internal framework that we called Faceweb, which was basically this idea that we can take the infrastructure that we built out for pushing code everyday, and not having to submit to an app store, building web code on the web stack that we had, and that we can translate that into mobile development. We just were never able to get the quality that we wanted.

So we made this decision two years ago to go in that direction. So it took us 6-8 months to build Faceweb, and get that approach going. Another four months or so to decide that it wasn’t going to do it, after we kind of committed to doing that. And then we had to start over and start rewriting everything to be native.

So that brings us to where we are now. We burnt two years, it’s really painful. I think that probably we will look back on saying that is one of the biggest mistakes, if not the biggest strategic mistake that we’ve made. But we’re coming out of that now. “

So that explains why the Facebook app for iOS was in such a terrible limbo for so long. And admittedly, it’s cool to see Zuckerberg own up and admit the mistake, rather than beating around the bush.

Next up, Arrington confronts Mark about the ongoing rumors that Facebook is building its own smartphone:

“It’s such a juicy thing to be able to say, “they’re building this phone.” That’s why I think people have wanted to write that. But it’s so clearly the wrong strategy for us. You know we’re building this network. We have 950 million users soon. It’s growing quickly. Let’s say we built a phone, theoretically, we’re not. You know, maybe we could get 10 million people to use it, 20 million. It doesn’t move the needle for us.

The strategy that we have, that’s different from every other major technology company which is building their own hardware and operating system — Apple, Google, Samsung, Amazon, Microsoft, everyone — we’re going in the opposite direction. We want to build a system which is as deeply as possible integrated into every major device and things that people want to use.”

Mark goes on to say that Facebook is focused on three major mobile platforms: iOS, Android and mobile web, which he says is used more than iOS and Android apps combined. But despite the explanation, Arrington continues to pester Mark for Facebook phone intel. So expect to continue to hear about it.

Other interesting topics discussed in the interview include the Instagram acquisition — Mark says that he has no intention of forcing the app into Facebook’s infrastructure, and notes that it has just passed 100 million users — Zynga’s recent run of bad quarters, and Facebook’s future plans for search.

The whole interview is really worth watching, all 32 minutes of it. Very rarely do you get to hear the CEO of a company the size of Facebook speak so candidly and openly about the company. And it’s really good. How Good? Well, since the talk ended, Facebook’s stock has gone up 4.6% in after hours trading.