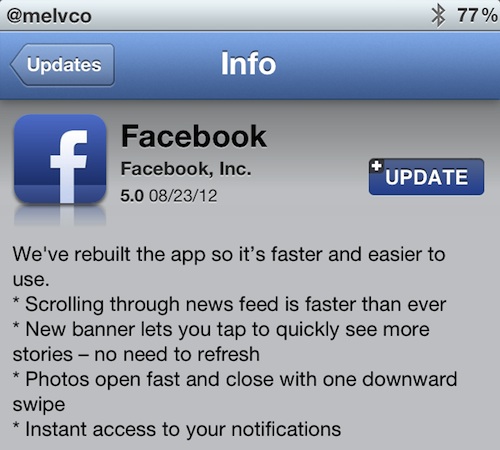 The wait is over folks! The new Facebook app that was promised to us almost three months ago has arrived in the App Store. It runs faster, launches quicker, and includes a handful of new features.

The client has been completely rebuilt in Objective-C (no longer HTML5) and now has an enhanced photos feed, built-in Messenger support, and several other performance improvements…

“Today we’re announcing an update to the Facebook app for iPhone and iPad that makes keeping up with friends faster and easier. Facebook 5.0 for iOS is twice as fast as the previous version when launching the app, scrolling through news feed and opening photos in feed.

We’ve rebuilt the app from the ground up, so now the app opens much faster and your news feed and notifications load right when you open Facebook.

As you scroll down your news feed, all your friends’ stories appear faster than ever. A banner lets you know when new stories come in, and you can tap once to immediately see the latest updates.”

The app doesn’t look much different, but you do notice a higher level of polish than before. And boy is it fast. Loading from a cold start still takes a few seconds. But once it’s open everything happens almost instantaneously.

If you currently have the Facebook app, or you’ve deleted it recently due to hatred, we recommend you download the new version immediately — it’s a huge improvement. You can find it in the App Store, and obviously it’s free.

So, tell us, what do you think of the update? Worth the wait?