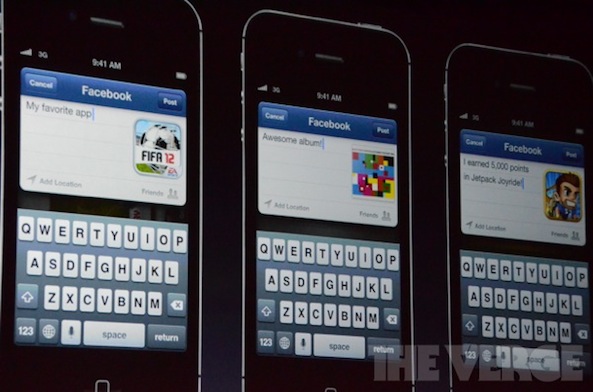 As expected, Apple has just announced all-new Facebook integration in iOS 6. And the company’s iOS VP Scott Forstall is on stage right now going through all of the details.

Just like the Twitter integration added in iOS 5, the new Facebook integration will add system-level support for the social network. This will allow you to upload photos to Facebook and update your status from practically anywhere in iOS…

How do you post a status? Well in iOS 6, there will be buttons labeled ‘Tap to Tweet’ for Twitter and ‘Tap to Post’ for Facebook in Notification Center, that will allow you to post to either social network respectively. Sounds similar to the Notification Center widgets jailbreakers have had for months now.

But the integration doesn’t stop there. Apple is also giving developers access to the Facebook API, allowing third party apps to interact with the service without the need for all of those terrible approval screens. It’s also integrating Facebook into Game Center and all of its iTunes Stores, so you can Like your favorite apps, books and other content.

Now it’s easier than ever to interact with the world’s largest social network. And there’s no need to leave your app to do it. Share a photo to Facebook right from Camera or Photos. Post your location right from Maps. Brag about a high score right from Game Center. If you have your hands full, just ask Siri to post for you. You need to sign in to Facebook only once, and you’ll be off and sharing. Never miss another birthday or get-together, since Facebook events are integrated into Calendar. And your Facebook friends’ profile information is integrated into Contacts, so when they update an email address or phone number you automatically stay up to date. Now that’s something to post about.