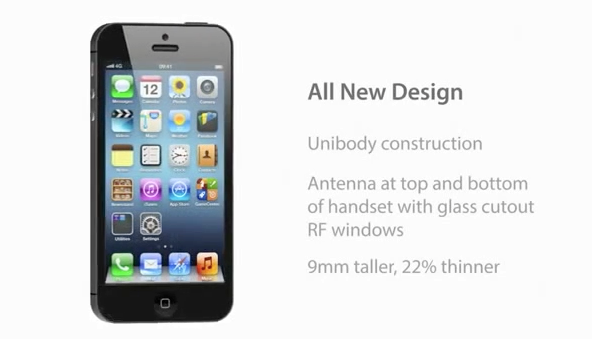 We’re just a little more than 24 hours away from Apple’s big iPhone event, where the company is expected to unveil the latest iteration of its popular smartphone.

And what would an impending Apple event be without a concept video? Check out this clip we came across that shows off possible iPhone 5 design and features…

The video was created and animated by Sam Becket. And while it’s just a concept, it does a good job of demonstrating how we expect the new iPhone to look and act.

For example, the design of the handset seems spot-on. A combination of leaked parts and insider reports points to a taller, slimmer iPhone with a unibody construction and two-tone rear shell. It’s to be made of metal, with glass windows on the top and bottom for the antennas. We’re also expecting a smaller, reversible dock connector, and LTE network compatibility.

That being said, the video also ventures into the deep end of the rumor pool, calling for features like a Home button with a built-in fingerprint scanner. As cool as that may sound, we haven’t heard much in the way of fingerprint scanner talk for this year’s iPhone. And while we’re at it, we’ve heard very little about the FaceTime camera sensor being 720p.

In fact, there are a few things we still don’t know about this year’s iPhone, which is what makes Wednesday so exciting. Because as much as we think we know about the handset, we’re sure Apple still has a few surprises up its sleeves.

Anyway, what did you think of the concept video?