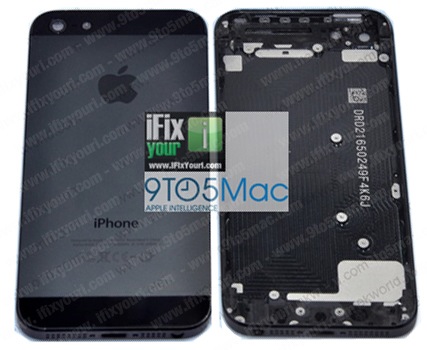 A new report out this morning points us to an allegedly leaked part purported to belong to an upcoming sixth-generation iPhone (not to be confused with a front panel part leaked by another source). It looks like it’s machined from a single piece of an aluminum alloy, similar to Apple’s Unibody manufacturing process for notebook chassis. If authentic, the leaked part casts additional light on the backside and profile of Apple’s upcoming iPhone revision.

From what we can see, the part does follow a lot of the rumors and speculation. For instance, you can see the smaller dock connector at the bottom and it appears thinner overall. We’re told that the extra space on the bottom is used by Apple to enhance the speakers which will be louder and of a higher quality than the current iPhone. The supplier says the back plate is one piece anchored by an aluminium alloy (not liquidmetal).

The publication was forwarded the backplate part by iPhone repair experts at iFixyouri, but whether or not it belongs to one of the prototypes, the final product or is simply a fake is anyone’s guess at this point.

I know a blurry spyshot don’t do it justice, but I’m kinda not liking this back plate, looks pretty fugly to me.

What I’m liking a lot is the “enhanced speakers” claim.

Apple should be credited with improving the loudness of the iPhone’s speakers as we’ve come a long way since the original iPhone in this regard, though lots more should be done.

I’m still finding myself dissatisfied when the speakers quality on my iPhone 4S.

Also, isn’t it a high time that the iPhone gains stereo speakers?

UPDATE: MacRumors posted these 2 blurry shots, compliments of uBreakiFix.com. As noted by the publication, the spacing and the font type used for the word “iPhone” on the back panel looks anything but legit.