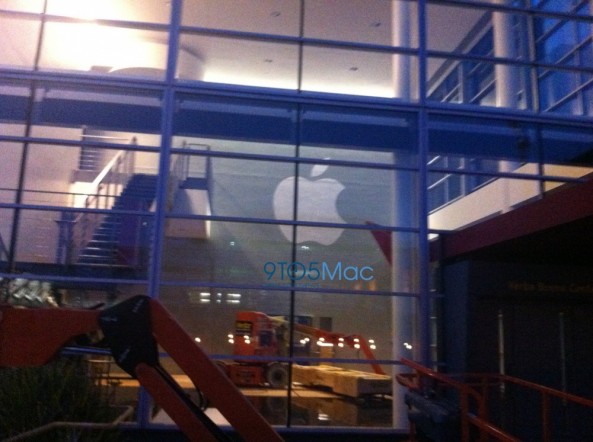 Earlier this week, Apple sent out media invitations to an event to be held at the Yerba Buena Center for the Arts in San Francisco on September 12. It’s widely expected to unveil a new iPhone.

We’re now just 5 days away from the gig, and, like clockwork, Apple has started to prep the venue. You can see several cherrypicker machines out front, and Apple’s unmistakable logo in the window…

9to5Mac shares some of the first pictures of the Apple-ized Yerba Buena Center, and says that we should start seeing more insightful banners hung both inside and outside this weekend.

As you may recall, Apple held its iPhone 4S event last year at Town Hall — a small auditorium on its Cupertino campus. So the fact that it has chosen a larger venue like the Yerba Buena Center for next week’s iPhone event really speaks to its significance.

On that front, this year’s model is expected to be one of the largest upgrades in the handset’s history. If current rumors hold up, it will have a larger 4-inch display, LTE capabilities and some other internal upgrades. It will also feature a thinner design and an all-new dock connector.

Also on the menu for September 12 is iOS 6, which should get some stage time, as well as a public release date. It’s said that Apple will host a second gig in October to unveil its iPad mini.