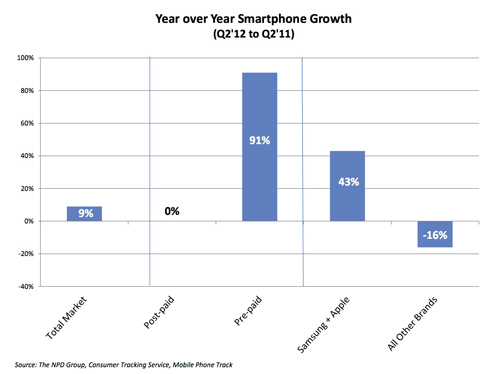 Though Android is peaking in the United States, globally Google’s platform is widening its lead over the iPhone and in the second quarter of this year accounted for an IDC-estimated two-thirds of all smartphones sold, mainly thanks to Samsung whose Android handsets represented 44 percent of all Android smartphone shipments.

A new survey by NPD sheds more light on market trends. See, postpaid smartphone units remained flat in Q2 2012 compared to the year-ago quarter. All of the growth in smartphones came as a result of prepaid smartphone unit volume almost doubling on an annual basis…

Per NPD data, and as seen in the above chart, Apple and Samsung together accounted for 43 percent of smartphones sold in the U.S.

Even with prepaid sales rising, the pricey postpaid iPhone has managed to remain the best-selling phone model, accounting for nearly one-third (31 percent) of all smartphones sold in the U.S.

That’s clearly a sign that the iPhone’s allure isn’t diminishing nor is the handset becoming boring, as some die-hard geeks would have you believe.

Second was Samsung with nearly one in four smartphones (24 percent), followed by HTC (15 percent), Google-owned Motorola (12 percent) and LG (6 percent).

By concentrating on their best, flagship devices, while at the same time supplementing their volumes with lower priced alternatives, both Apple and Samsung are extending their lead over the other smartphone makers.

To be a share leader means participating in all segments of the market, in order to take advantage of pre-paid and other growth opportunities, while also providing the hero devices that drive customers to your brand.

Of course, recognizing the growth in prepaid sales, Apple this year rolled out the iPhone to nearly a dozen prepaid carriers in the U.S. like Virgin Mobile, Cricket and a bunch of others. Apple’s also been offering the iPhone on a prepaid basis through several carriers overseas.

NPD says that “prepaid smartphones are no longer just cheap, also-ran options, focused on older and less capable phones” as carriers have begun to “aggressively market some of their best current smartphones on a pre-paid basis to a new set of customers, in order to keep sales humming along”.

The problem is, some of the latest prepaid phones are really, really affordable, often selling for under $200 with a no-commit month-to-month option.

Apple’s been trying to contain the growth of cheap Android handsets on the low-end by re-pricing its iPhone 3GS below $200 unsubsidized.

Unfortunately, the iPhone is prohibitively expensive in major developing markets, including Brazil, India and Russia, where Apple’s arrogance in dealing with local carriers is cited as the chief reason for low iPhone penetration in the 150 million people market.

Looking at the above chart, I guess you could make an argument that Apple cleverly covered a wide gamut of price points with different iPhone models, but these are mostly postpaid options.

Also of note: smartphone penetration passed the 50 percent mark in the U.S. so as the other half of feature phone owners upgrade to smartphones, a big portion of them will be looking for mid and low-priced handsets and not necessarily Apple’s high-end device.

Worse, they’ll be looking for postpaid deals rather than commit their soul to lengthy and pricey carrier contracts.

What Apple badly needs is a sub-$200 iPhone 4S, unsubsidized.

Maybe that’s in store when the next iPhone comes into full view in a few weeks time?