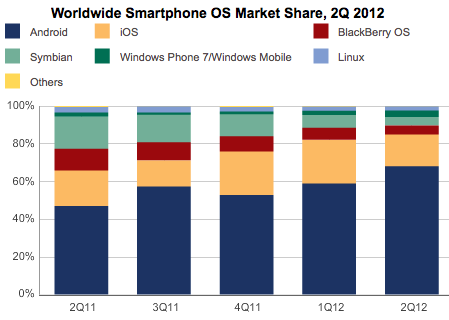 Research firm IDC today posted the findings of its smartphone market survey for the second quarter of 2012. Apple and Google continue to dominate the smartphone space, with iOS and Android devices accounting for an astounding 85 percent of all smartphones shipped during the quarter. In other words, more than eight out of ten smartphones in Q2 2012 were either iPhones or Android devices.

The Android freight train just keeps chugging along, posting a remarkable 106.5 percent year-over-year growth versus a 27.5 percent unit growth for the iPhone. Though Android is still winning in terms of sheer number of units, Apple leads the space in profitability.

According to Raymond James, Apple captured about 43 percent of the industry’s revenue in Q2 2012 and 77 percent of operating profits…

As for BlackBerry and Symbian, each has fallen below an IDC-estimated five percent share.

Per IDC, “Android continues to fire on all cylinders”, thanks to a variety of different devices avaiable and attractive price points.

At post time, Android Ice Cream sandwich was on nearly sixteen percent of Android devices in the wild, a result of new phone releases that run Ice Cream Sandwich.

Of course, Android owes its success to Samsung and IDC notes as much:

Android’s success in the market can be traced directly to Samsung, which accounted for 44.0% of all Android smartphones shipped in 2Q12 and totaled more than the next seven Android vendors’ volumes combined.

Also not to be overlooked was the growing relevance of Android 4.0 Ice Cream Sandwich with the release of numerous models worldwide.

As for Apple, IDC says that swirling rumors about the next iPhone and cooling demand for the nine-month-old iPhone 4S both contributed to Apple’s slower growth compared to Google:

iOS posted double-digit growth, but not enough to keep up with the overall market. Despite these trends, iOS remained the solid number two operating system behind Android worldwide, and greater than the total number of smartphones on the remaining platforms.

If Asymco analyst Horace Dediu is right, then Apple will sell a whopping 263 million iPhone units over the course of next twelve months. Dediu simply used Apple marketing chief Phil Schiller’s statement given last week to the court, under oath:

Taking this data point and historical data, he was able to derive the aforementioned figure.

Taking that forecast forward and assuming a 60 percent growth rate, I currently have abut 200 million iPhones over the next twelve months. If 85 percent of those are the next generation, that yields about 170 million iPhone 5s through mid 2013.

Do you think Apple will manage to sell more than 263 million iPhones over the next 12 months?