Though Samsung sold twice as many smartphones during the June quarter compared to Apple, the South Korean company still lags behind Apple in terms of the most important metric, operating profit. According to latest estimates, Apple took home more than three out of four dollars earned in the cell phone making biz.

That’s despite shipping only a little more than six percent of all mobile phones in the world, mind you. Even more interesting than that, Apple and Samsung together took 108 percent of the industry’s operating profit. Wait, what?

According to Raymond James analyst Tavis McCourt (via AllThingsD), though Apple doesn’t ship the most phones in the world, the Cupertino, California company managed to capture about 43 percent of the industry’s revenue and a whopping 77 percent of operating profits.

He wrote in a note to clients:

Ultimately, profits are the feedstock of innovation; and, innovation drives profits. Until Samsung starts generating more profits than Apple, we would not be overly concerned with who has the unit share lead.

Remember, HP and Dell still sell a lot more PCs than Apple sells Macs, but does it matter?

Remember, Apple was able to maintain its profit lead amid iPhone sales lull because it commands high gross margins on the iPhone and iPad that are the envy of the industry. 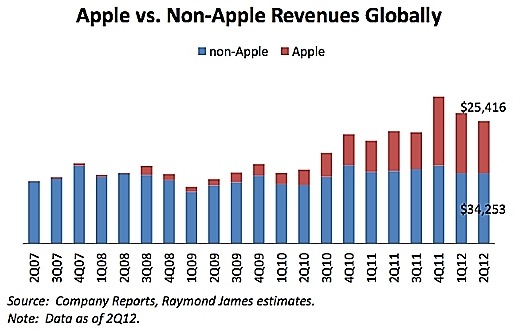 And this is who rules the profits. 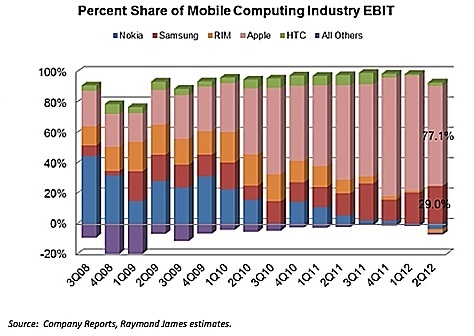 According to Apple’s filing, the iPhone is much more profitable than the iPad. The company scored gross margins of 49 to 58 percent for U.S. iPhone sales between April 2010 and the end of March 2012. During the same period, gross margins for U.S. iPad sales were between 23 to 32 percent, barely half the iPhone’s.

Canaccord Genuity analyst T. Michael Walkley wrote in today’s note to clients (via CNET) that the two companies together took 108 percent of the industry’s operating profits.

How’s that even possible?

Because other handset makers posted hefty operating losses. Only Apple and Samsung profit from selling mobile phones. For everyone else – namely Research in Motion, Nokia, Motorola and Sony – the cell phone biz has turned into a money-losing affair.

It’s a little weird that carriers are still complaining about high iPhone subsidy (they’ve been doing it forever) and blaming the iPhone for data caps and increased upgrade fees.

As for the aforementioned estimates, both analysts hit it out of the park.

Companies employ various metrics to paint themselves as succesful, depending on the occassion. Sometimes it’s the number of units sold, other times it’s revenue. What shareholders tend to zero in are operating profits (earnings before interest and taxes) as this metric tells them how profitable a company is and, consequentially, what return on their investment might be.

As with everything in this world, smartphones are all about the money.