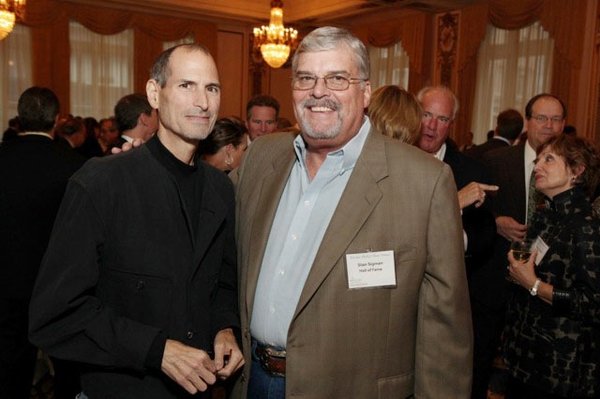 Before wrapping up his career-defining iPhone presentation on January 9, 2007, Steve Jobs invited Stan Sigman, then the CEO of Cingular Wireless, to join him on stage and announce a partnership that would send shockwaves of fear throughout the wireless industry. For the first time in history, a telecom would work in concert with a phone vendor to make a revolutionary phone possible without messing the user experience with junkware.

Stigman even confessed publicly that he agreed to take on the iPhone without ever seeing it, “because of the confidence I have in Steve Jobs to deliver his vision”. Notwithstanding, a trained eye could tell the two men were worlds apart.

One was an archaic executive stuck in the old days and the other a forward-thinking unconventional manager with uncanny ability to figure out what consumers wanted before they even knew it.

Here’s a reminder of how Jobs really felt about carriers, the way they go about their business and how virtually nothing’s changed…

Speaking at the at the D3 conference in 2005 (video available for download via iTunes), Jobs famously called the carriers “orifices” and didn’t spare harsh words exposing their innovation-stifling practices. Although this was two years before the iPhone’s public unveiling, Apple had already approached carriers to talk iPhone at the time.

And if Nokia and Motorola don’t listen to them, well, Samsung and LG will. So the handset manufacturers are really getting these big thick books from the carriers, telling them “here’s what your phone’s gonna be”.

Then he added, “we’re not good at that”.

And here’s the video segment.

What struck me personally the most about the iPhone keynote was Sigman’s lack of public speaking skills, painfully evident as he launched into his segment pulling by cue cards out of his pockets.

Cingular, which became wholly owned by AT&’T in December 2006 as a result of AT&T’s acquisition of BellSouth, would allow Apple to own the user experience completely. It would also share a percentage of monthly service fees collected from iPhone subscribers and adapt its network to support new features like visual voicemail.

All this in exchange for an exclusive multi-year distribution agreement that would last until 2011.

Th executive would later elaborate how he and Jobs had a special relationship dating back to 2005, when they had first started talking about bringing the iPhone to market:

Steve called me at home late one evening. We had just introduced a Motorola phone that had iTunes on it and Steve had a vision of doing more with the device than that.

Steve and I had not seen a phone — we just had confidence in our respective organizations that we could do this. It was a big gamble, but I had that much faith in Steve Jobs.

He told me what he could do and I believed him, and history will show that was a good decision.

We said no. We have nothing bad to say about the Apple iPhone. We just couldn’t reach a deal that was mutually beneficial. They would have been stepping in between us and our customers to the point where we would have almost had to take a back seat … on hardware and service support.

As you know, the iPhone exploded, prompting Verizon to ask Research In Motion to develop an iPhone killer. According to The Wall Street Journal, an executive said that Verizon “started really rushing around saying, ‘Helps us build an innovative competitor to the iPhone'”.

One particular advert comes into mind, The Island Of Misfit Toys, seen below.

Verizon would eventually land the iconic smartphone on February 10, 2011. It would go on to become their best-selling smartphone until last month, when Motorola’s Droid Razr Maxx reportedly unseated the iPhone on the Big Red carrier’s network.

From today’s perspective, not much has changed in the wireless industry outside the iPhone. Carriers still install their junkware on other devices, dictate what features should be put on phones and are slow to upgrade network infrastructure yet big on aggressively advertising costly services at exorbitant fees.

It certainly feels that his portrayal pretty much holds true nowadays. The Verge argues that five years after the iPhone, carriers are still the biggest threat to innovation.