Specifically, Android’s share fell from 61 percent in Q2 2011 to 56 percent of the U.S. market in the June quarter of this year as shipments fell from 15.3 million units to 13.4 million units.

Android remains the number one platform by volume in the United States, but its market share is approaching a peak and Apple iOS has been gaining ground.

Apple is rumored to be launching a new iPhone in the coming weeks, and that event, if it takes place, is going to heap even more pressure on Android in its home market.

The strained economy is to be blamed for a decline in total U.S. smartphone shipments which fell five percent in the second quarter to under 24 million units. Strategy Analytics also says that high smartphone penetration rate, which recently passed 50 percent in the U.S., coupled with carriers tightening their upgrade policies also contributed to the slow down. 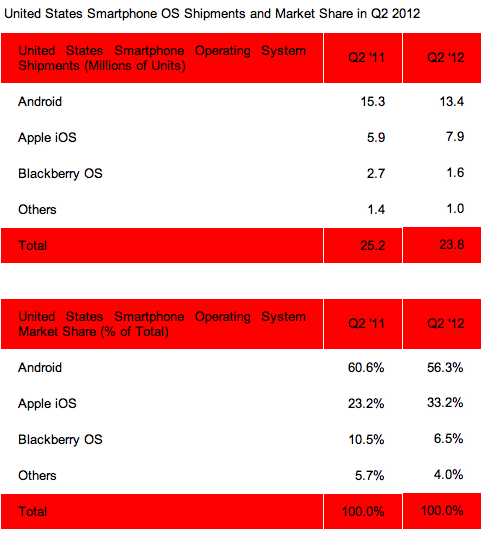 Continuing on a downward spiral, dropping to seven percent from eleven percent in just twelve months.

Strategy Analytics also recently reported that the iPad is widening its lead over Android tablets, rising from 62 percent in Q2 2011 to 68 percent global market share in Q2 2012. Strategy Analytics says it’s the highest level for the iPad for almost two years.

When it comes to iPad in enterprise, IDC found out that nearly half of polled developers think Apple’s tablet will win the battle for business customers.

Focusing only on handset sales, Piper Jaffray analyst Gene Munster in his recent annual cell phone survey found out that nearly two-thirds (65 percent) of polled respondents would pick an iPhone as their next handset, meaning Android is effectively losing one-third of current users to the iPhone.

IDC attributed Apple’s drop to strong sales of Samsung’s Galaxy S III which cleverly exploited Apple’s annual refresh cycle and the iPhone’s sales lull ahead of the next model.

Do you think Android is peaking in the U.S.?