A few interesting observations from Piper Jaffray analyst Gene Munster’s note to clients (via Fortune), issued this morning. Munster conducted his annual cell phone survey and found out that nearly two-thirds (65 percent) of polled respondents would pick an iPhone as their next handset. Only one in five (19 percent) plan to go with Android and just 2.5 percent, or one in forty, will stay loyal to their BlackBerry, a result of RIM’s downturn.

What’s more, 51 percent of respondents who planned on making the iPhone their next smartphone (whether current iPhone users or not) said they were waiting for the next iPhone…

Of those who are defecting from other platforms, namely Android whose re-buy rate has grown from 47 percent last year to 60 percent, Munster writes:

While the improvement is a positive sign, Android is still losing 33% of current users to the iPhone. We also note that 38% of Blackberry users expect to switch to iPhone.

The iPhone’s re-buy rate is about 95.7 percent. Based on this data, Munster estimated that as many as 80 million iPhone 5 sales are already “in the bag” for fiscal 2013. He sees a total of 125 million iPhones (all models) throughout the 2012 fiscal year.

The analyst predicted the iPhone 5 should help up Apple’s smartphone share to north of 30 percent by 2015, up from the low 20 percent range right now.

Here’s a table view of the findings. 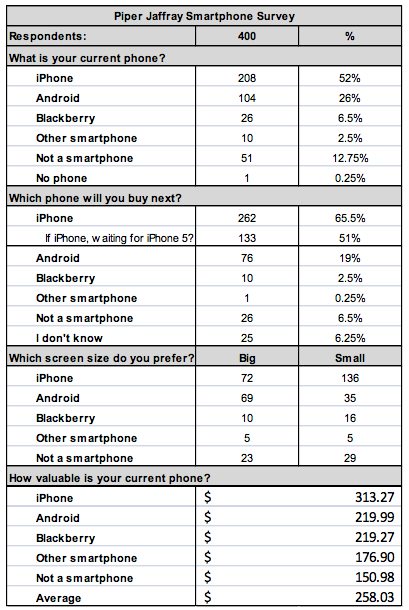 What’s really peculiar is that 56 percent chose a handset with a smaller screen when presented with unlabeled scale drawings of an iPhone and a Droid Razr Maxx.

In our non-scientific poll, more than 43 percent of respondents said four inches should be the new gold standard for the iPhone and just 16.86 percent want Apple to keep the next iPhone at the same 3.5-inch form factor as prior iPhones.

Apple is widely expected to unveil a taller, thinner iPhone sporting a two-tone design dominated by a metal backplate either in September or October.

A story late evening by The Wall Street Journal claimed the device will adopt in-cell display technology which integrates touch sensors into the LCD assembly for a thinner appearance and improved image quality.

Apparently mass production of the screens has already started so Foxconn should begin assembling new iPhones any time soon. And if Foxconn’s boss Terry Gou is to be believed, it’s gonna put Samsung’s Galaxy S III to shame.

Did you delayed your planned smartphone purchase and are waiting for the next iPhone?