It appears Samsung is creeping up on Apple slowly but surely. Not content with overtaking Apple and Nokia as the world’s largest smartphone and cell phone vendor, respectively, Samsung during the June quarter managed to widen its lead by selling twice as much smartphones as Apple.

Driven by the surprisingly strong start of its latest flagship handset, the Galaxy S III, Samsung has managed to increase its worldwide smartphone share while Apple slid. Man, Apple really needs to refresh the iPhone twice a year because this annual update cycle is becoming the company’s Achilles’ heel…

Apple reported sales of 26 million iPhones during the June quarter, missing estimates by three million units as more and more people hold off upgrading until the next iPhone arrives in September or October.

Samsung stopped divulging smartphone and tablet numbers last summer for competitive reasons so we have to rely on estimates. Also, Samsung’s numbers are shipments while Apple’s numbers are sell through.

According to research firm IDC, Apple’s worldwide smartphone share slid from 18.8 percent in the year-ago quarter to 16.9 percent in Q2 2012. Though the iPhone grew 27.5 percent year-over-year, global smartphone shipments surged at a faster 42 percent clip.

During the same period, Samsung nearly doubled its global smartphone share, having surged from 17 percent to a whopping 32.6 percent based on estimated sales of 50.2 million smartphones, up 172.8 percent year-over-year.

Here’s your table, courtesy of IDC.

Samsung employs a ‘shotgun’ strategy wherein many models are created that cover a wide range of market segments. Apple, in contrast, offers a small number of high-profile models.

While both companies have expanded their geographic presence in pursuit of market share, the two companies will inevitably come into greater conflict as both try to generate additional gains.

If you need another proof that Samsung is eating into iPhone sales, here it is. 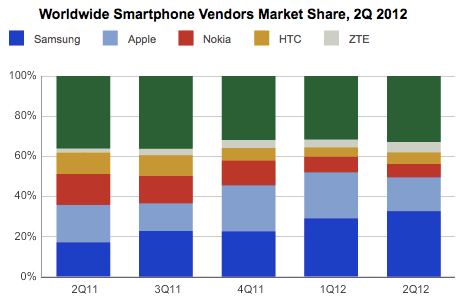 IDC’s numbers mirror figures from Juniper Research, which noted that Apple needs to make a bigger iPhone and create something new of Siri’s magnitude to compete successfully with huge Samsung handsets like the S III.

Another interesting thing happened as well.

Samsung reported Q2 operating profit of $5.9 billion and $4.6 billion in net profit, or half of Apple’s $8.8 billion Q2 net profit which includes Macs, iPhones, iPods, iPads and other products.

Put together, Apple and Samsung together account for more than half of smartphone sales globally and as much as 80 percent of cell phone industry’s profits.

Considering as much as 60 percent of Samsung’s profits come from smartphones and smartphone-related components, Samsung is pretty much a Galaxy company.

Likewise, Apple is now an iPhone company as nearly 60 percent of its profits now come from the iPhone and related products and services.

You may find it unsettling that Samsung has rapidly overtaken both Apple and Nokia to become the world’s largest smartphone maker.

It appears Apple’s annual refresh cycle has finally come to bite the company in the you-know-what. iPhone shipment volume is traditionally highest in the first two quarters after its release, but this time Apple saw a quarter-over-quarter decline just six months after its latest iPhone unveiling.

Furthermore, Samsung gets to report one more quarter of monster sales as the next iPhone won’t land before fall. If Samsung manages to sell 15 million S III phones during the current quarter, as projected, that’s an additional $7 billion in sales increase.

Perhaps Apple needs to step up its game by having two iPhone hardware refreshes a year, one for a major model introduction, followed by a minor hardware and/or cosmetic bump up six months later.

In other words, compress the iPhone 5/5S unveilings in one year instead of two?