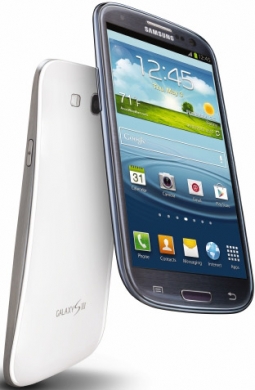 A month ago Samsung publicly set a target for Galaxy S III shipments at ten million units by the end of July. Today, the company announced it hit that milestone. A successor to the Galaxy S II, by and large the most popular Android handset, the Galaxy S III was unveiled at a London event on May 29, 55 days ago. A month later it arrived at U.S. shores.

In the two weeks following the London unveiling, the S III received more than nine million pre-orders from a hundred carriers, making it the fastest-selling gadget in history.

Head of Samsung’s mobile division Shin Jong-kyun announced the milestone today, according to South Korea’s Yonhap News Agency. The company is aiming to have the S III available on three hundred carriers in 147 countries by the year’s end.

Given the strong momentum and a summer vacuum until Apple delivers its sixth-generation iPhone in October (if Al Gore is to be believed), Samsung thinks it can sell 40 million Galaxy S IIIs by the end of 2012, an all time high for Samsung phones.

The ten million units in 55 days translates into a daily average of 190,000 Galaxy S III phones. Apple sells on average 388,000 iPhones each day, based on March quarter shipments of 35.1 million units (all iPhone models). Per IDC, Samsung in the March quarter accounted for 45.4-percent of all Android smartphones.

“Samsung is expected to be the smartphone hero in the second quarter”, said IDC analyst Francisco Jeronimo.

The S III in the UK stole some market share from the nine-month-old iPhone 4S, which dropped from 25 percent to 20 percent, while the S III grabbed 40 percent of the UK market for smartphones, according to a Financial Times report earlier this month.

Samsung’s bet on Android has obviously paid off big time. The company crushed everyone, including Apple and Nokia. Today, Samsung ships both the most phones and smartphones of all cell phone vendors. Of course, Samsung makes a bunch of phones, from high-end smartphones like the Galaxy S series to basic entry-level cheapos.

The South Korean conglomerate also has a backup plan (like Nokia) if Android becomes a liability due to patent infringement claims by Apple, Microsoft and Oracle. Samsung’s plan B is its home-grown operating system for smartphones and feature phones called Bada, which according to Gartner has a 2.7 percent worldwide smartphone share, more than Windows Phone’s 1.9 percent.

There’s no denying that Samsung really hit the ball out of the park in smartphones. The company is sparing no expenses on advertising, it designs and manufactures its own chips and AMOLED displays, is a supply chain giant and also makes everything from microwave ovens and washing machines to notebooks, phones and tablets to bad-ass TV sets.

On a final note, this is an Apple-centric blog, but let’s not kid ourselves: the S III is selling like hot cakes. Samsung has managed to outdo competition and creep up on the iPhone from behind. Also, Apple and Samsung together gobble up more than 80 percent of worldwide profits and that’s for the entire cut-throat phone making biz which includes basic dumb phones, feature phones and high-end smartphones.

With that in mind, I guess my question would be can anyone slow down Samsung’s smartphone march or will the company dominate cell phones for years to come, like Nokia once did?