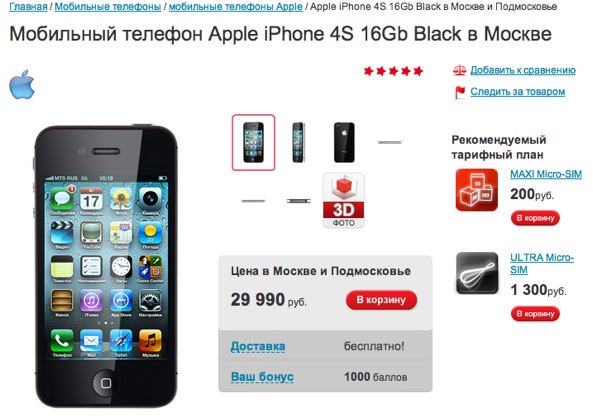 The iPhone is as popular in the nearly 150 million people market of the Russian Federation as it is elsewhere. However, unlike in the United States, Western Europe and in most other developed countries, Russian customers are expected to pay through their nose to get their hands on the sought-after device.

If you ask carriers, Apple’s arrogance in dealing with its Russian wireless partners is behind the company’s relatively low penetration in that market. This of course creates a sizable opportunity for Android cheapos. If I were Tim Cook, I would book a flight to Moscow to discuss lowering shipment commitments in exchange for a more flexible pricing scheme lest I lose their support…

How much exactly do our Russian friends pay to get an iPhone?

As you can see in the above screenshot from a webstore of MTSS, the Russian largest carrier with over a hundred million subscribers, a 16GB iPhone 4S fetches 29,900 Russian rubles, which translates into a whopping 930 United States dollars.

According to Apple’s list of carrier partners, in addition to MTS the iPhone is only offered through carrier Beeline in Mother Russia.

Competing handsets from other manufacturers can be had for as low as an equivalent of $120, a fraction of the price iPhones command. It should be noted that phones in Russian are mostly sold contract-free and that carriers in most cases avoid subsidies.

But why is Apple treating its Russian customers to the more than 50 percent higher iPhone prices?

It all comes down to competition (or the lack of it) and Apple’s ‘our way or the highway’ attitude. According to MTSS execs, quoted by Bloomberg:

They’re more in a dictatorship mode where they say, ‘This is what you have to do or you don’t get the iPhone’. Being arrogant with your partners in big markets doesn’t pay off.

If Apple showed more flexibility then they would have a higher penetration in our markets.

And here’s Tim Cook fielding a question from an analyst on the last conference call, touching upon Apple’s pricing policy in developing markets:

I firmly believe that people in the emerging markets want great products like they do in developed markets. The goal is to make the very best product, and that’s more important and overshadows all other things.

It also blows my mind that the iPhone is commanding premium prices in other developing markets, namely Brazil and India, where an average income prevents the vast majority of population from even dreaming about having an iPhone in their pocket.

Why does it have to be like that is beyond my comprehension, but I don’t like the policy and I have a feeling it’s gonna backfire big time (hint: Android cheapos).

As for Cook’s remark that folks in developing countries also strive for quality, that is true but only for deep-pocketed customers. In the case of Russian folks, there are many, many people in Russia who are what you’d consider rich by Western standards.

The new Russian elite is just crazy for all things Apple.

I can attest to this from my own experience.

I’m currently blogging from the beaches at the beautiful Mediterranean city of Rovinj, particularly popular with Russian tycoons, bank managers and shady businessmen who come to vacate here in increasing numbers. They usually stay in five-star designer hotels such as Lone, where a one-night accommodation fetches a couple hundred bucks.

I see these Russian tourists every day at the beach with their young wives or mistresses (who look like models) and children. It’s an unmistakable sight as the whole families carry an assortment of Apple devices with them, from high-end MacBook Pros and the latest iPhones to iPads, one per each family member.

But that’s the elite.

What about average folks, huh Apple?

And then there is Apple, the most-valued corporation in the world which just said through the mouth of its design lead that it’s goal is not to make money.