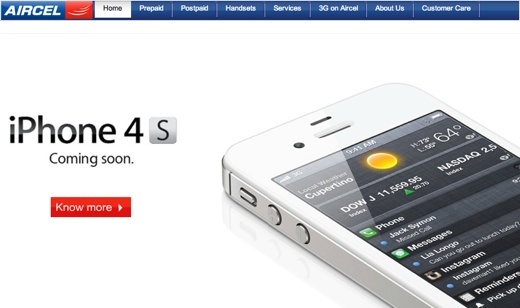 Those living in India won’t have much longer to wait before they can get their hands on an iPhone 4S, according to reports.

The Times of India is reporting that Apple will begin selling its latest iPhone through at least one of its usual carrier partners in the country on November 25th, with both Bharti Airtel and Aircel set to offer the popular handset.

Aircel has already begun teasing the iPhone 4S to customers via its official Facebook page, similar to what UK and other international carriers did before their respective launches…

November 18th is the date pencilled in for the beginning of pre-orders, according to reports.

The Next Web has done the math based on the US selling price of an iPhone 4S 16GB, and it believes that the same model will retail for around  ₹35,000 and ₹40,000. The devices will be unlocked, with the unusual reverse subsidy used to bring customers’ monthly payments down over a two-year contract.

As is the case in other countries, Indian carriers are expected to begin offering the iPhone 4 and iPhone 3GS at discounted prices once the 4S has gone on sale, giving Apple fans an entry point into iPhone ownership, no matter their budget.

Indian customers will no doubt be relieved at the news that they will receive the new iPhone much sooner than they have in the past. Customers have had waits of up to 11 months after the initial US release date before now, a trend which Apple seems to be leaving behind this time around.