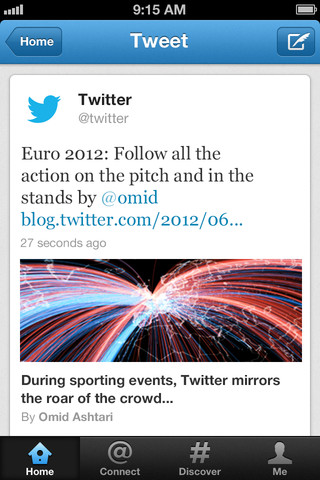 As leaked yesterday, Twitter has just pushed out a major update to its iOS client with more than a dozen new features, including the biggies like alerts for specific users you follow, enhanced search autocomplete, in-app notifications and additional sources and media types that will show in-line, to name a few. Changelog is right after the break…

Twitter bragged in a blog post about major improvements to search autocomplete that will hopefully yield more usable suggestions when you search for people.

Also cool, when you now tap a Tweet linking to a Kickstarter project, Twitter will serve its video in-app rather than rely on the embedded browser (works for Etsy and Vimeo, too). Tweets linking to sources like The Atlantic display article summaries, which is also nice.

In-line media and article summaries, of course work on the web, too. Don’t get impatient if you don’t have the new experience yet as the company said it’ll take a while to gradually roll out these capabilities.

Here, have a look at a pair of iPad screenshots. 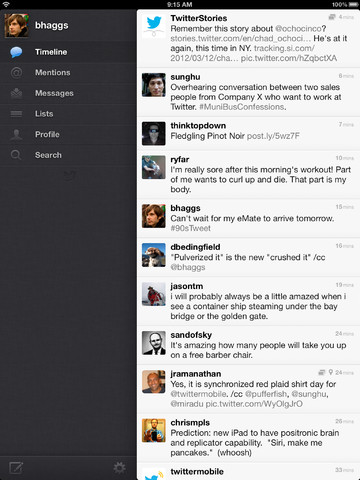 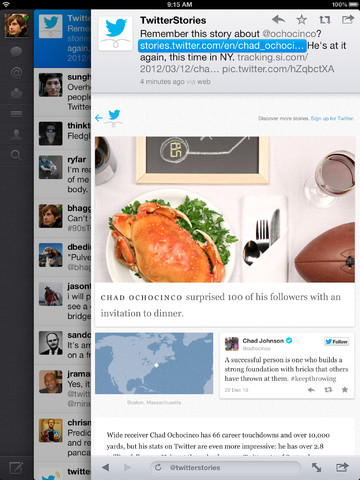 I know what you’ve been waiting for the most – notifications.

Twitter for iOS 4.3 now finally alerts you whenever a person you follow sends a new tweet or retweet. You can customize this on a per-user basis, on their profile, and via your account settings on the device.

You’ll also appreciate the little things. For example, tapping a user’s avatar finally takes you directly to their profile. Or, Twitter now displays brief non-interruptive notifications in the status bar while you’re using it (you’d previously get iOS Notifications instead, which was cumbersome).

Oh, and Twitter for iOS has the new bird logo (what, you didn’t hear?).

This is from iTunes release notes:

– Expanded Tweets: when you view Tweet details containing links to partner websites, you can now see content previews, view images, play videos and more [please note: this feature is rolling out gradually]
– Enhanced experience around selected events with the best Tweets and photos from those involved
– Push notifications for Tweets: choose to receive notifications from people you follow anytime they tweet or retweet
– Ambient notifications: enables you to see brief non-interruptive notifications in the status bar while you are using the app
– Improvements to search autocomplete for users
– Discover: now indicates when new stories are available for you to view
– Tappable avatars that take you directly to user profiles
– Performance improvements
– Support for password entry in app when experiencing authentication issues
– Hungarian language support
– Updated with new Twitter bird
– Many other tweaks, polish, and bug and crasher fixes

If only they included iCloud sync, like Tweetbot, so I could continue on my Mac right where I left off across multiple iOS devices. Oh, and what’s up with the Mac client? Will it get some love soon?

As for the iOS/Android build, Looks like the update we’ve been all waiting for, no?