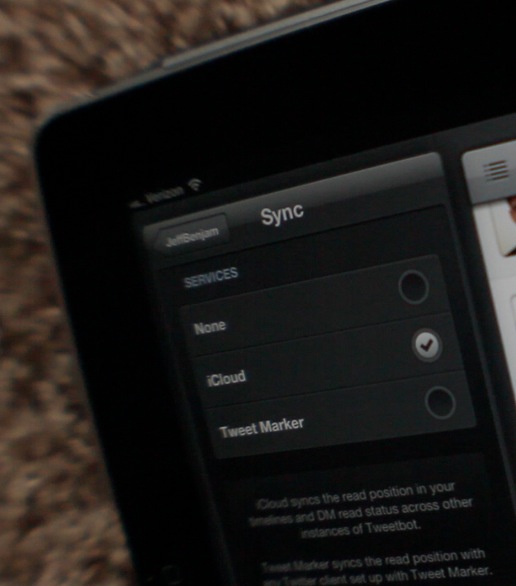 A couple of weeks ago version 2.2 of Tweetbot — my favorite Twitter client for iOS — was released to the public.

While that update included a number of interesting new features and obligatory bug fixes, the new iCloud sync capabilities stand head and shoulders above everything else.

One of the things that has always annoyed me about Twitter clients, and by extension Tweetbot, is that there was no reliable method for picking up where you left off across multiple devices. I know Tweet Marker support was there before, but I’ve never had very much success with it, and it only works with timelines.

I have Tweetbot installed on two iPhones, two iPads, and an iPod touch. As you can probably imagine, it doesn’t take long for things to get really messy when tweeting from all of those different devices at various points in time.

That’s where the beauty of iCloud comes in. The new iCloud sync makes Tweetbot a seamless Twitter experience, able to sync timelines, mute filters, and even DM read statuses across multiple iOS devices…

Setting up Tweetbot’s iCloud sync is easy to setup. All you need to do is open Tweetbot, go to settings, and select your Twitter account under account settings. There you should find the Sync option. Open the Sync option, and you will be able to choose between None, iCloud, or Tweet Marker. Select iCloud, and you will be good to go. Remember you will need to do this on all of the iOS devices where you have Tweetbot installed.

This bodes well for the future

Now that I have some excellent Twitter syncing capabilities across all of my iOS devices, I’m feeling a bit left in a lurch when it comes to my Mac.

Right now I use Echofon on my Mac, but that’s just because I’ve found it to be the best Twitter client that I can find at the moment — translation: it’s just adequate. If a version of Tweetbot is released for the Mac, I will switch before I get a chance to tweet about it.

I know there have been whispers that the Tapbots have been slaving away on an OS X version of Tweetbot for quite some time now, but the fact that we now have iCloud syncing makes a Mac version all the more feasible.

Hopefully that common thread between iOS and OS X leads to more than just an unfulfilled rumor.