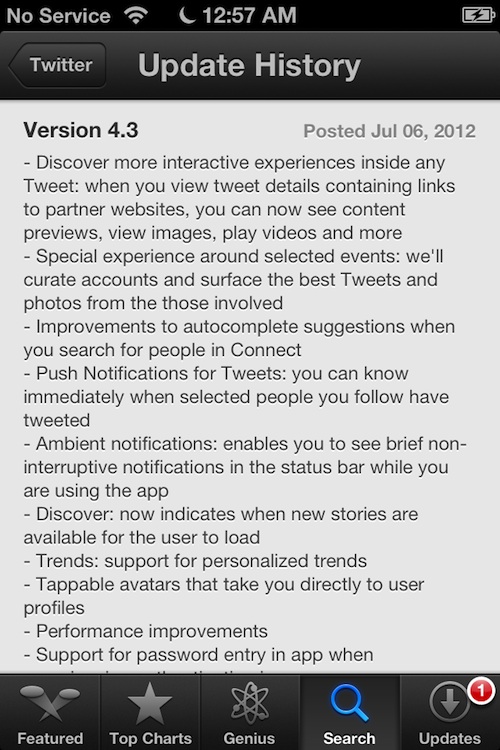 Twitter’s iOS apps have received a lot of criticism over the past year — particularly the iPhone app. Its lack of power features, and controversial redesign late last year, has driven millions of users to opt for third-party clients.

But according to a recently-leaked change log, Twitter’s iPhone app is about to receive a major update. Twitter 4.3, which should hit the App Store in the next few days, will feature new in-app push notifications and several other enhancements…

Last night, 9to5Mac noticed that the redesigned App Store in iOS 6 was showing a change log for Twitter 4.3 — despite the fact that it hasn’t been released yet. As of this writing, it’s still there, and includes a long list of new features and enhancements:

The new push notifications addition will certainly come in handy, as it will allow users to be notified when their favorite Twitter accounts (like iDB) send out a tweet. And other new features like personalized trends and ‘special event experiences’ look interesting as well.

Twitter 4.3 isn’t available for download yet. But if you’re interested in seeing the release notes for yourself, you can find them in the Twitter for iPhone app, in the iOS 6 App Store, under Update History. Of course, we’ll be sure to let you know as soon as the update becomes available.

What do you think of the new features in Twitter 4.3?