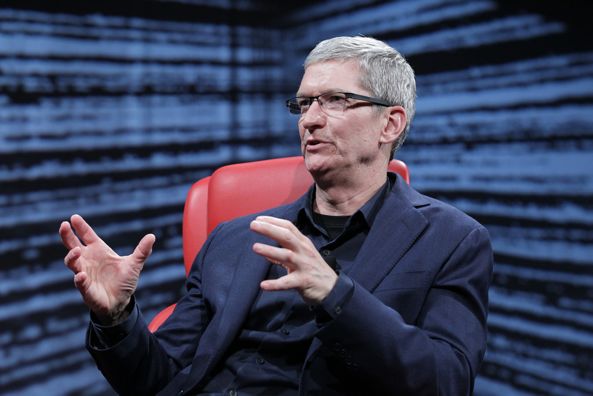 One of the inevitable subjects technology columnists Walt Mossberg and Kara Swisher pressed Apple’s Cook on during yesterday’s D10: All Things Digital opening-night talk touches upon the post-PC world and the convergence dilemma. As you know, Cook’s predecessor Steve Jobs was a huge proponent of tablet computing.

Jobs used to passionately defend the tablet with all his heart and soul, insisting on the post-PC revolution spearheaded by the iPad. So, here’s Cook’s take on tablets displacing PCs, the iPad, the assumed convergence of tablets and PCs and more…

The iPad has been unbelievable. I think we’re in the first inning. There’s a few pretty much everywhere I go.

That’s simply about the iPad. I’ve always believed that the tablet market would be bigger than the PC market. Many people just laughed that off but today I think there’s a lot more believers than that.

Okay, but who’s to say tablets and PCs won’t converge?

In my view, the tablet and the PC are different. And you can do things with the tablet, if you’re not encumbered by the legacy of the PC.

But isn’t tablet just another screen?

If you view it as different, if you take the view that says this is another PC, all of a sudden you’re pulling along all of the baggage of the PC market.

This brings to mind a commercial Apple aired back in 2010 in order to sell us another screen in our lives.

Hey, but what about products such as the Asus Transformer Prime? Isn’t there room for another category of device that falls somewhere between a tablet and a notebook?

I said a few months ago, this flippant thing, you could converge a toaster and a refrigerator. Sure, you could do that. But I just think you wind up not building the best product, in this particular case, when you converge those.

Cook first articulated the toaster-refrigerator dilema in an April conference call with analysts.

But some folks beg to differ with Cook.

Enter analyst Peter Misek, who speculated iOS and OS X would merge soon into one giant monster of an operating system, similar to how Windows 8 ws built to scale from the tiniest smartphone screens to monstrous 80-inch television sets.

Tell me again like I’m a five-year old, why exactly is a marriage between the iPad and the MacBook doomed to fail?

Trying to do all those things that the OS of the PC does, and perhaps should do, it’s trying to converge laptops and tablets and therefore you’ve got a clamshell kind of thing and you’re lugging this thing with you, and so the industrial design is not optimized for tablet.

And let’s not forget this important expectation:

So specs do matter then?

If you look at it as a notebook, you’re not going to come out of the design of the product and have it be a kick-ass product where someone says wow, this is what I wanted.

I’m not big on that, as you can probably tell.

He’s not big on that…

It’s really not as simple as it sounds – even not that the iPad mainstreamed the tablet – to make the case for tablets and argue there’s no point in merging them with notebooks.

Time will tell whether Cook stays true to his mantra.

Remember, Steve Jobs had said video didn’t make sense on a portable music player and that Apple wasn’t interested in building a phone.

So what do you guys think?

Should Apple try to combine the iPad and the MacBook Air into a unique new tablet-meets-notebook category of device?